On Memorial Day I woke up with a sore throat, and realized that the funky feeling I had the previous day was not due to the long road ride, but was indeed the onset of a cold. Hermosa Creek was on the books for that day. Decision #1, ride or bail?

Of course I rode. Even if you live in Durango, Hermosa is only good to go at certain times of the year. I hardly ever get the chance to cruise this premier trail. I loaded up my system with Emergen-C, advil and Chuck and I headed out the door. We met up with JD and Craig Brossman at the Hermosa store, left a vehicle and drove to Durango Mountain Resort, nee Purgatory. "What's this?", you say, "A shuttle?" "Wimp." True. Usually I try to ride from the bottom, up, then back. But today we were going to go for the gusto. It was only really half a shuttle, as parking at the ski area still leaves a longish climb up over the ridge into Hermosa Park. 8 miles later we were truly warmed up.

The day, the weather, the group. It all came together. At one point there were slated to be 8-10 people on board for this ride. But then there were 4. And it worked quite well. Craig, Chuck and I had all done the Silverton ride, and JD was aboard a Fussy compliant single speed, so we seemed to hang together pretty effortlessly. 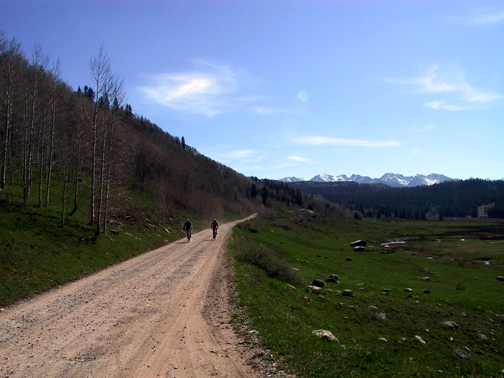 Chuck and Craig zipping to the trailhead. 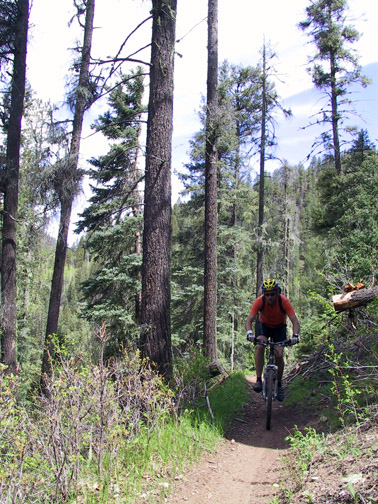 Poorly composed and exposed pic of Chuck, but when riding Hermosa, it is quite difficult to stop and pull out the camera and take photos, so it'll have to scratch. 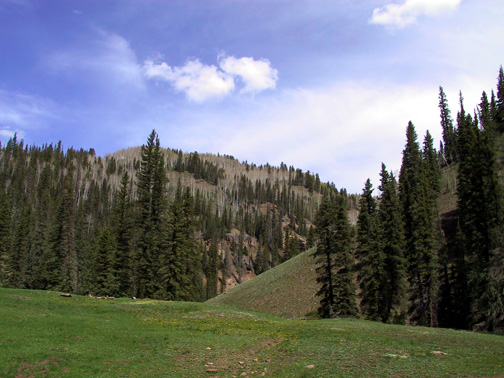 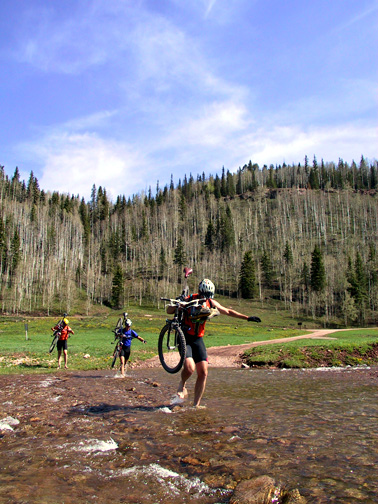 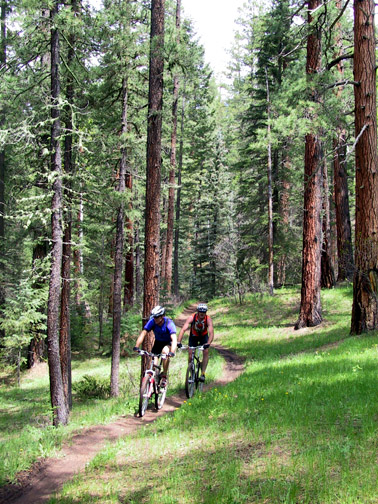 The Blur was quite happy with Hermosa. The long descent holds an interesting challenge. I wasn't pushing it hard, but I was letting the bike zip along at a decent enough pace. At that speed the trail presents itself quickly. You have to survey the offerings, pick a line and roll it out, all while planning your next move. This is a fascinating way to spend a morning. Jumps, teeny technical sections, one or two creek crossings (one of which was quite deep...) unfurled under my wheels like some sort of magic carpet.

Of course you pay for the descent twice with Hermosa. Once cranking up to the trailhead, and once more at Dutch Creek. But despite that, and despite the puckish nature that Craig's rear hub was exhibiting that day, it was a great, great day.

Even fighting off a cold, I had a very nice ride. I truly enjoy the feeling of being dialed in to the bike. I don't view myself as any sort of biking expert, in fact I ran across a quote this weekend that neatly sums up my view on my riding. "I am not better than anyone else, I am as good as anyone else can be." I was a good on the bike that day as I could be.

After, we regrouped at Old Timer's for burgers 'n' beer.

After that I crashed out. I think I had about a 101 degree fever, and I needed to drive for 15 hours the next day. I racked out for about 15 and managed to drag myself back to Texas in decent enough order. Was it worth it? You bet your bippee.