Friday. The day from hell. Woke up in a roach motel out on the interstate west of town. T'was all my fault, I misread the map because all of the highways in Phoenix writhe around on themselves like snakes run over by lawnmowers. No matter, we headed to South Mountain for the big ride. Met up with the New Mexico contingent there and then things immediately began to shake loose. We were first informed that we couldn't have the demo trailer in the park. (Because it takes up too much space...this was told to us as three horse trailers whisked in) Then Mr. Fabulous, the neighborhood manager stopped by to tell us that we couldn't be outside of the park or the neighborhood association would call the police. (The neighborhood association is apparently very, very afraid of trailers.)
So we headed over to the warpaint parking lot and a rag tag group of us headed down desert classic to see if we could catch up with any flingers. 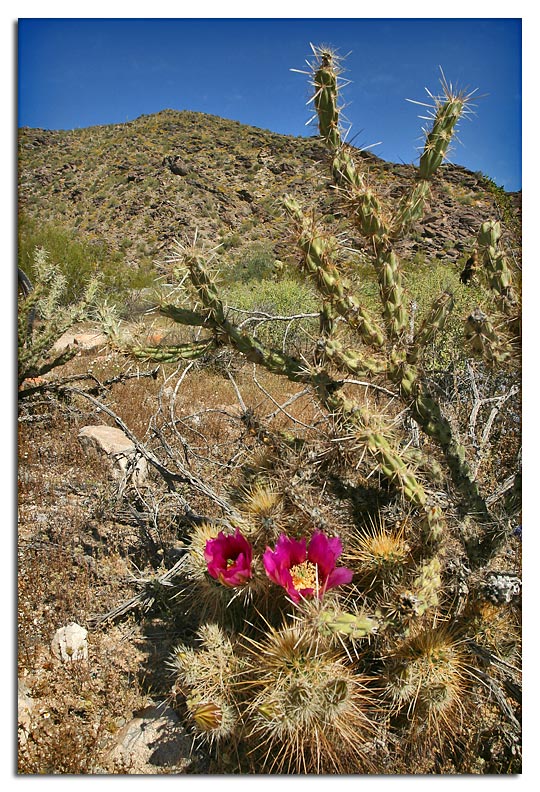 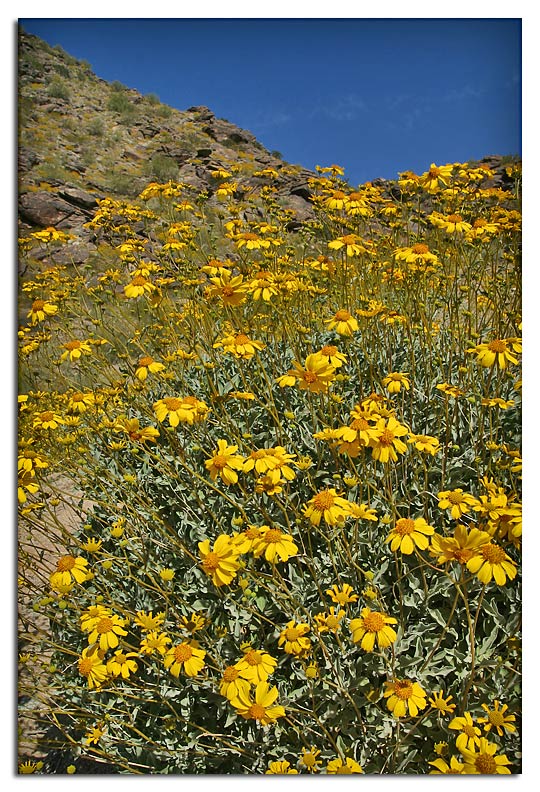 It is stressful, towing around a thirty foot trailer, trying to make it all work. Reknitting logistics and keeping some semblance of a smile. The flowers helped. 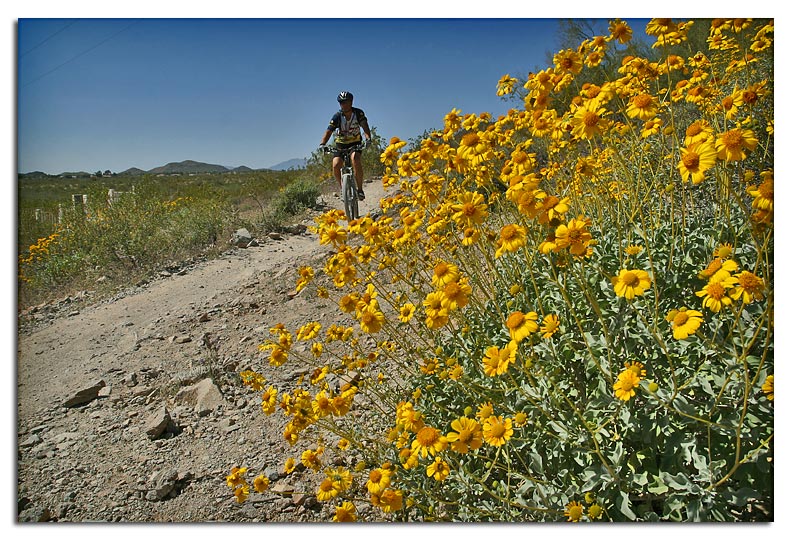 Zooming through the desert with dear friends helps too.
Soooooo we got back to the main parking lot and went by to say hi to Thane and Tica. (They were able to park in there because they didn't have a trailer) The minute we got there Thane stumbled while getting water from the van and managed to slice open his shin all the way to the bone on the edge of the door. He clapped his hand over it, said "I'm gonna need stitches" and passed out.
He came to, we called the paramedics, they came and doctored him up and then he went to get stitches and I stayed there to guard the Rocky Mountain Demo rig. It got warm, and for a while not much happened. I sat under a tree and watched this ancient woman on a cross bike slooooowwwwwlllly ride towards me on the road. It was warm, she was about 800 years old and going about .0002 miles per hour, but she was the only thing moving so i watched her for a while, growing sleepy as she approached me. Finally, just as she was riding next to me on the road, as I sat in the meagre shade of a paloverde tree yawning, her tire hit this little rock just right and it shot out from under her wheel at me like a watermelon seed, Ptcheeeoooowwwwrrrmmm! Whang, Right off of my tooth. I was more bewildered than injured. But this was exactly the sort of yellow bellied tricks that Friday, March 14 was determined to deal in. Finally Thane came back. Tica was happy to see him. Someone brought me a beer and we headed to the post ride party at the Big Ramada. 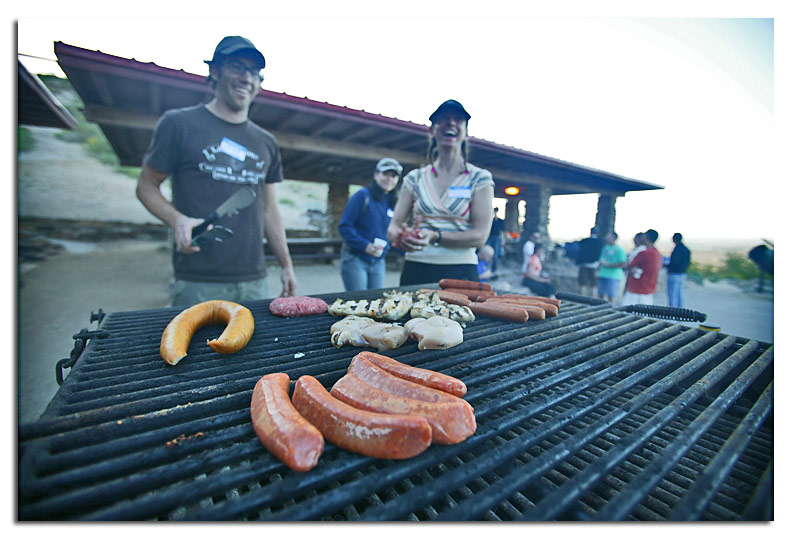 So the profile of the afternoon/evening was to festivus at the Big Ramada, then head up to Sedona to set up camp in preparation for Saturday's ride. Pretty simple. Oh, they were closing Interstate 17 between Phoenix and Sedona for some sort of bridge demolition that night, but that wasn't supposed to happen until 10.
So we headed north with plenty of time. Stopped for gas right at the construction zone and then on the way out of the gas station someone sort of cut the corner by the gas pump too close and sort of ripped the fender off of the trailer and sort of bent the axle too. 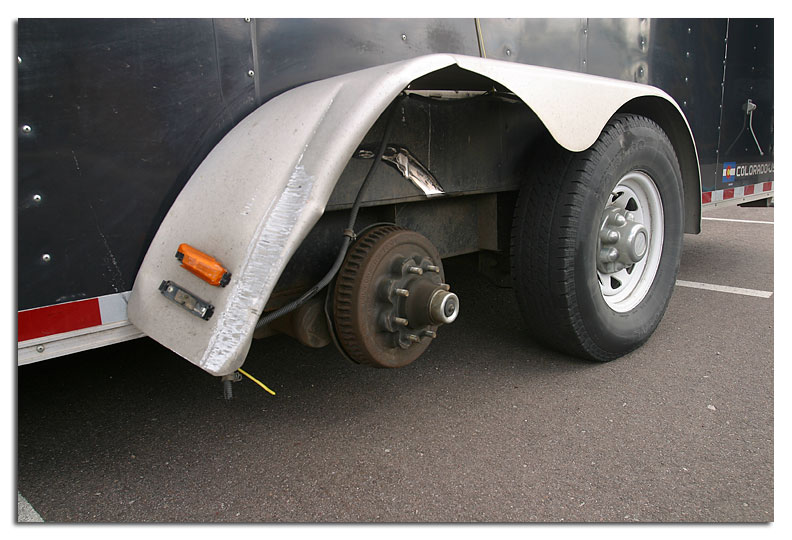 Sooooooooo we pulled off the wheel, got very creative with zip ties and reattached the fender. We cleaned the green frosting out of the inside of the truck. And it was 10 minutes until the highway closed down. I had no idea of how a 4 wheeled trailer was gong to tow with only three wheels. It had been a long day. To head north was to jump off of a cliff that none of us had the emotional or physical wherewithal to jump off of. So we retreated to the velvety embrace of McDowell Mountain.