I woke up early and went for a morning walk, watching the city wake up. Tai Chi in the park. I took photos of some boys playing a hotly contested soccer match in front of the Royal Palace. 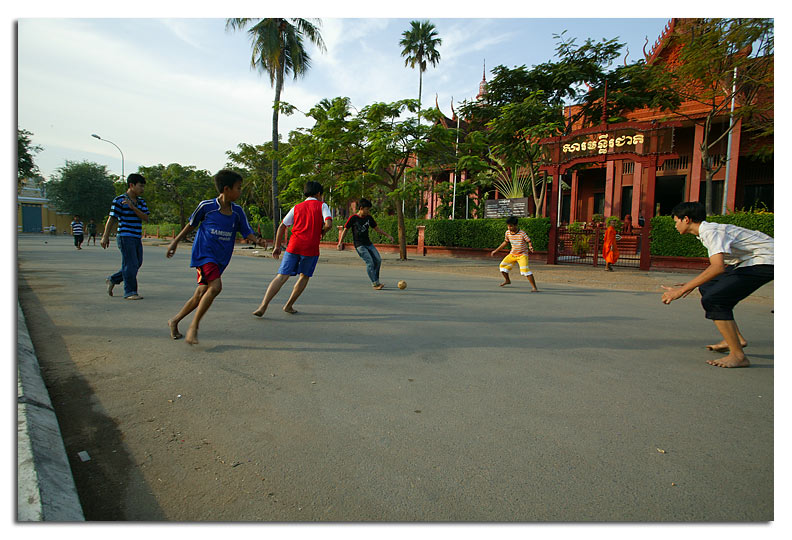 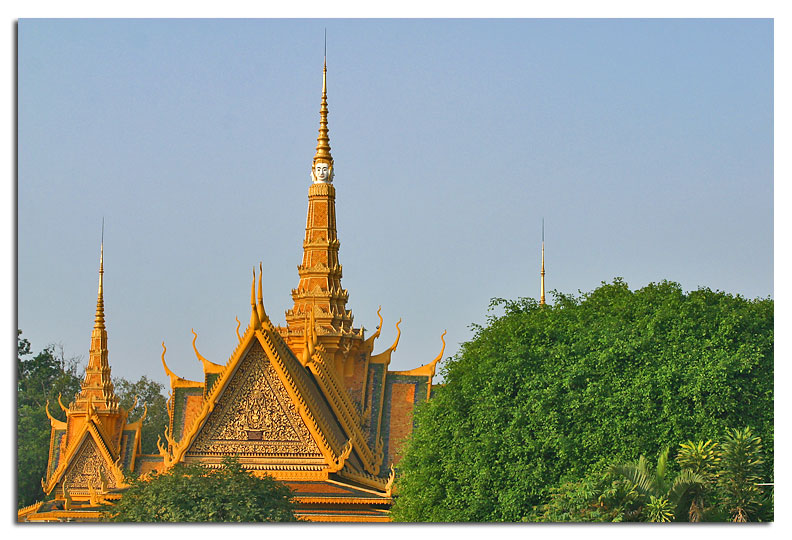 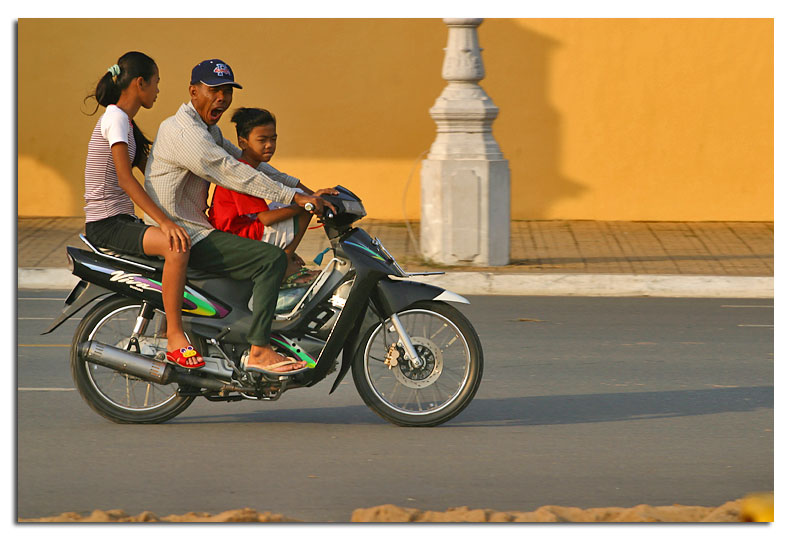 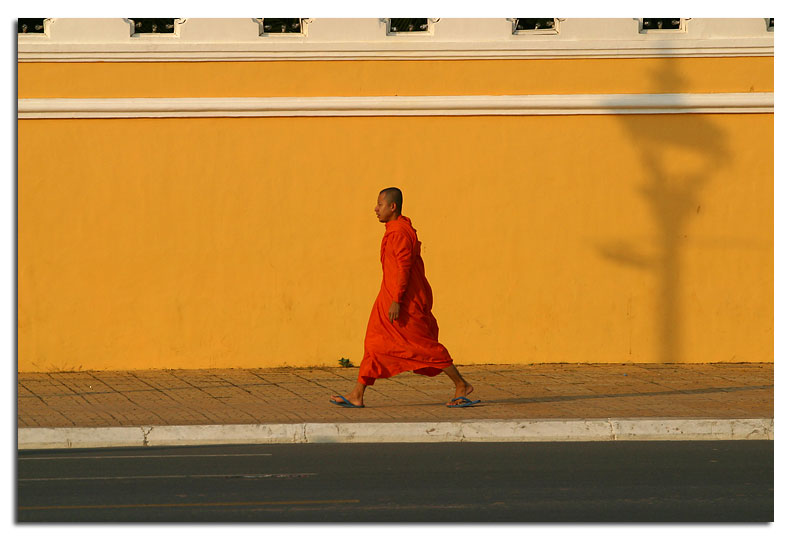 Then I ducked into a cafe for coffee.

The world works in mysterious ways. I was feeling my time here draw to a close, and I had been wanting to visit the dump. But every tuk-tuk and moto driver either didn't understand where i wanted to go, or refused to take me there. I was ruminating on this when a gentleman walked by my table and asked about the lens I was using on the 1Ds. We fell into conversation and as it turns out, he was Scott Neeson. Executive Director of the Cambodian Children's Fund (CCF). And he was intimately familiar with the dump and offered to take me there the next day.

I went back to the hotel room to face my next problem. I still had this cardboard box filled with volleyballs , paintbrushes, colored pencils, canvases, acrylic paint, teethbrush and all manner of other things. And I had to get myself, the box and all of my photographic equipment across town to the orphanage to drop it off and then take the kids on an excursion to the water park.

The Phnom Penh water park is just a stone's throw away from the orphanage. I wanted to get there by Tuk-tuk as it would be much easier to carry the box that way, but not one of the tuk tuk drivers understood my various attempts at conveying the notion of water park. A few got excited at my swooping gestures (meant to convey groups of happy children swishing down water slides) and said "airport!?!" Unfortunately a moto driver knew exactly what I meant, so I loaded up myself and the box and off we went.

The only way I could rest my feet (aside from dragging them on the pavement) was to sit with my legs in an almost cross legged position, with the box (which I soon referred to as "the accursed box") Wedged between me and the driver. There was of course, no way for me to hang on. I whimpered as we set off. My knees represented the widest part of our conveyance. I say knees, my driver thought of them as bumpers or feelers. We whizzed through morning rush hour traffic. Picture some cross between Blade Runner and the speeder chase in Return of the Jedi. As we ducked and weaved along, shooting though ridiculously narrow gaps, my knees grazed and glanced off of passing traffic, signposts, pedestrians, exhaust pipes, walls. I began to wonder what life was going to be like without legs. Perhaps I could take up painting, or the bagpipe.

Mercifully, we arrived at the water park and I was still relatively bipedal. My moto driver muttered something about "lots of robberies in area" before zooming off. Unfortunately my destination was the orphanage, which was camouflaged in a confusing web of alleys.. As I walked along, carting the accursed box, I was suddenly mobbed. "Mr. Tony, Mr. Tony!!!" I had set out to find the kids and they found me instead.  Without needing explanation or instruction, one of the boys (after an eager peep inside) took the box back to the orphanage and we headed to the water park, paid for 69 kids and ran screaming and giggling through the gates.  The simple pleasure of bobbling about on a bright yellow inflatable innertube was joyful to the kids. And the wave pool, or better yet the water slide, rendered them ecstatic with glee. 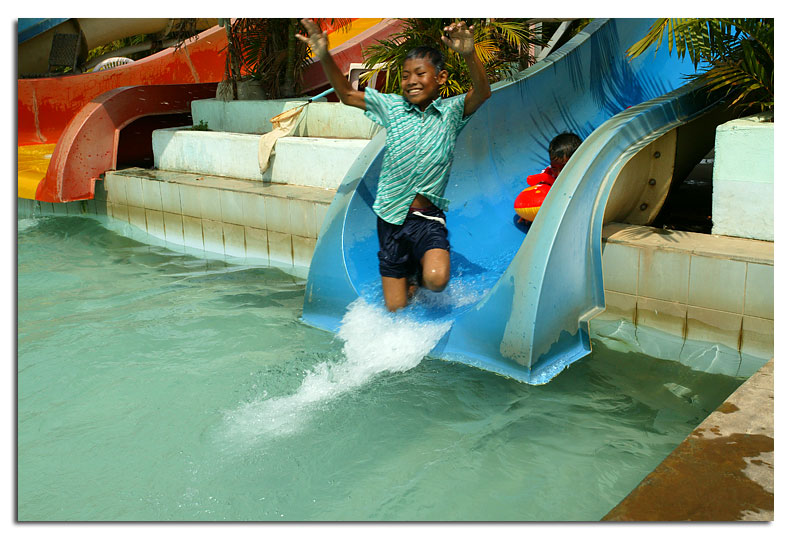 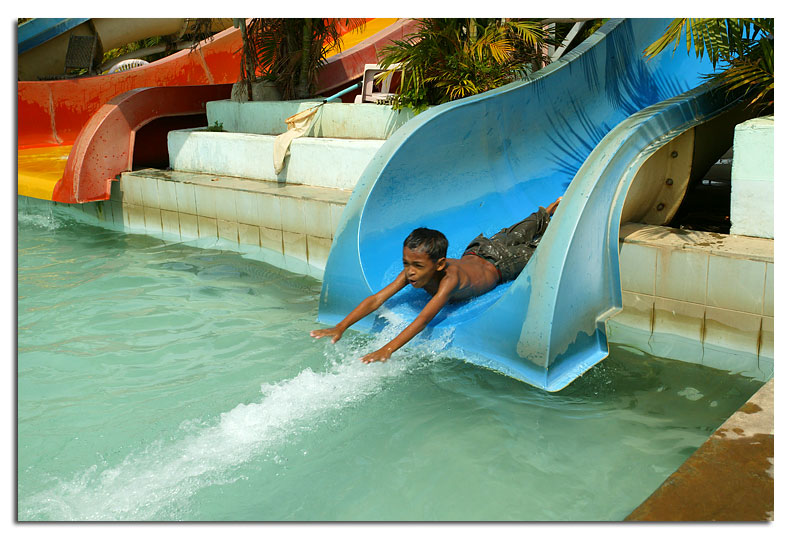 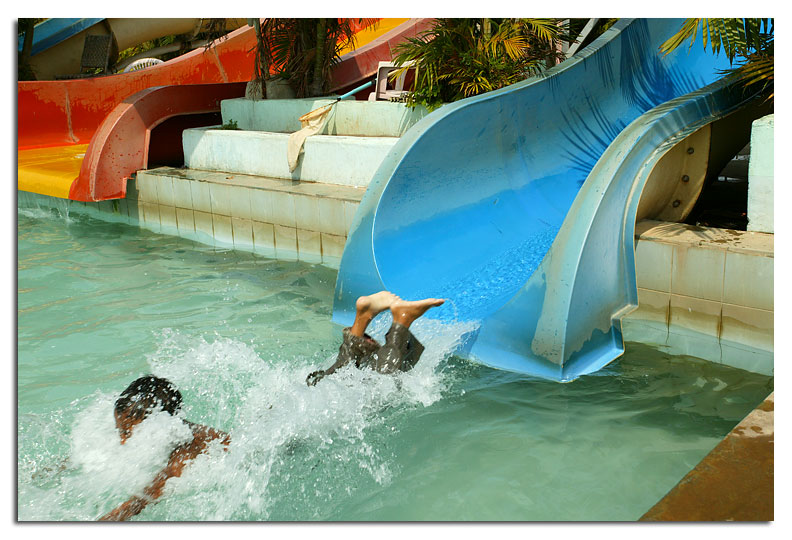 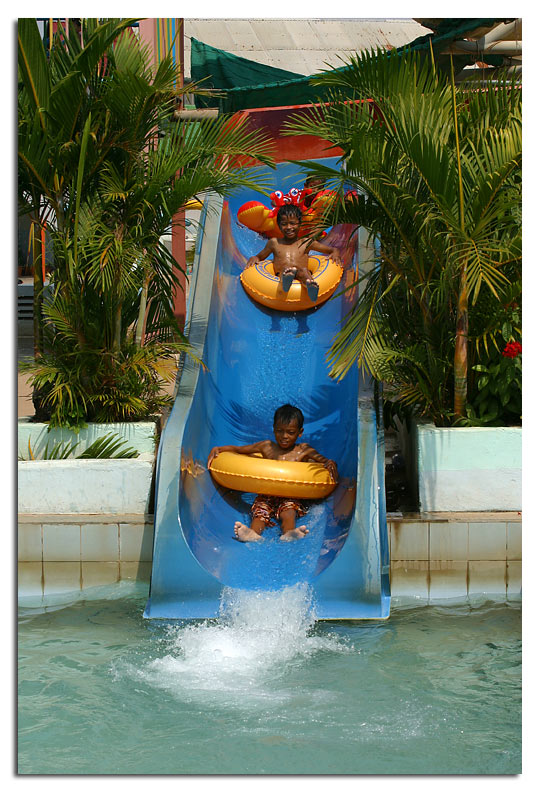 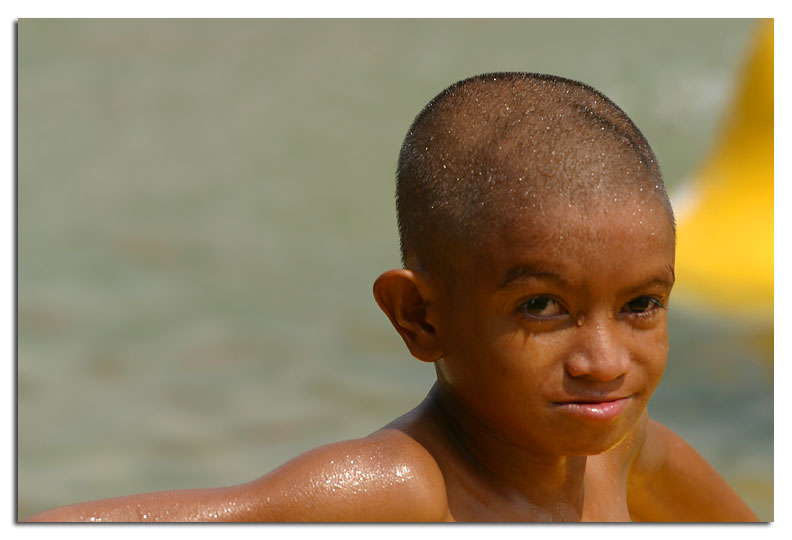 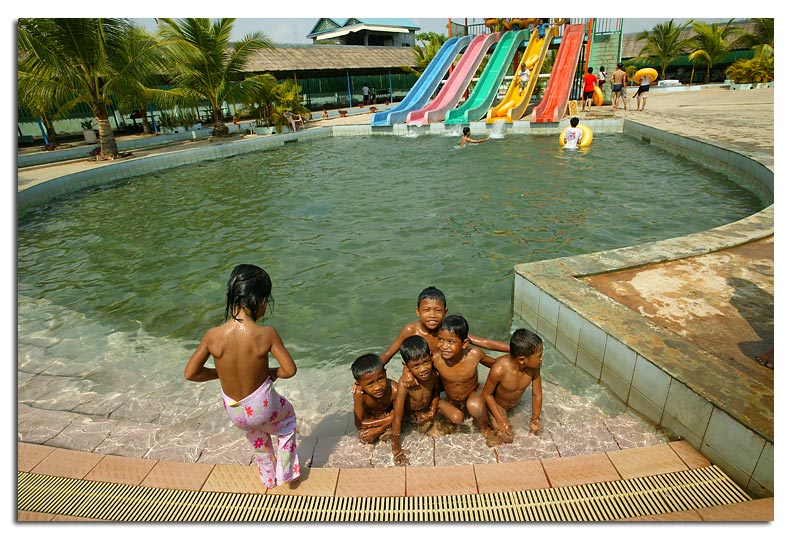 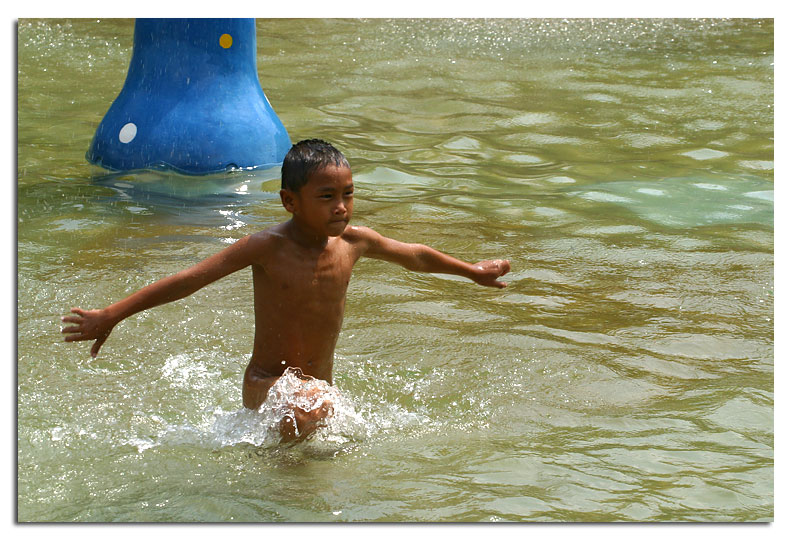 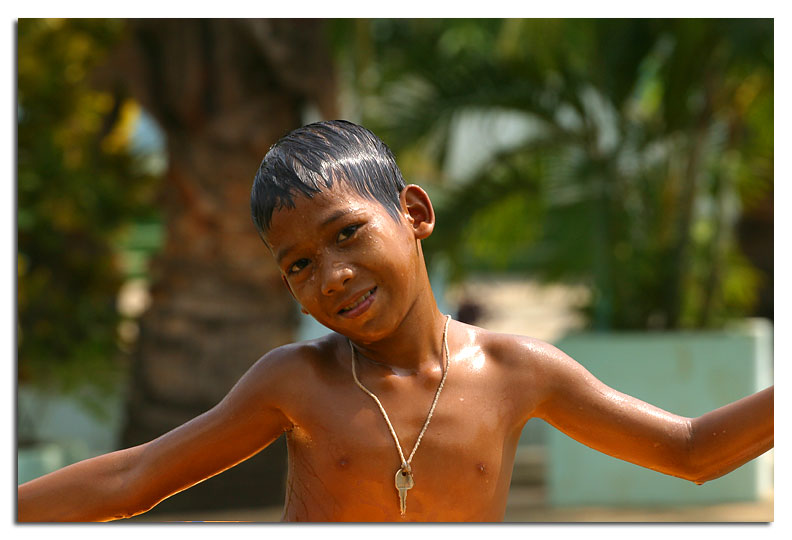 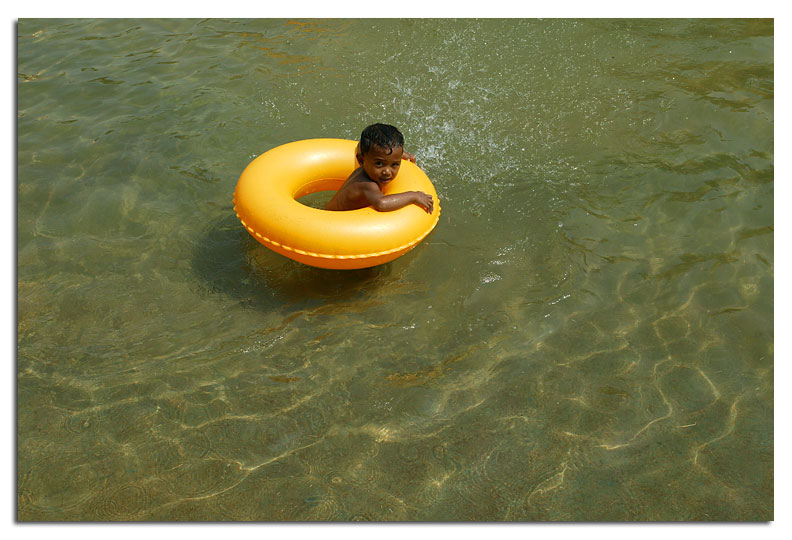 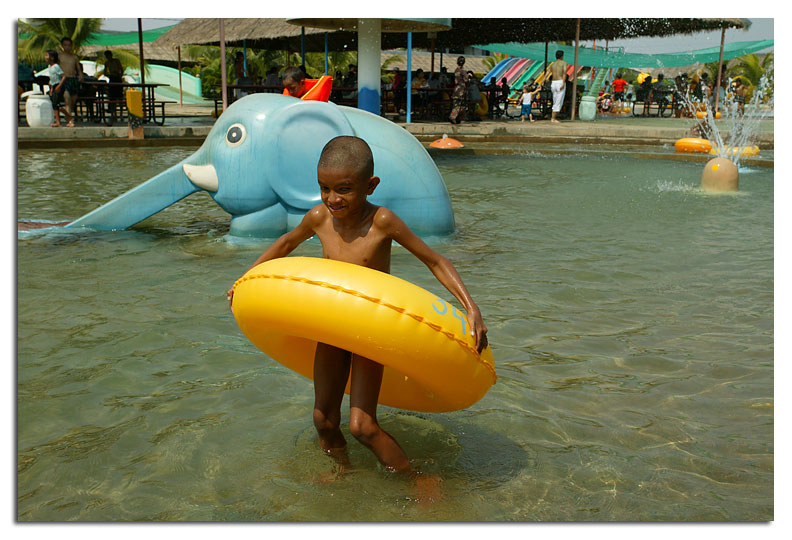 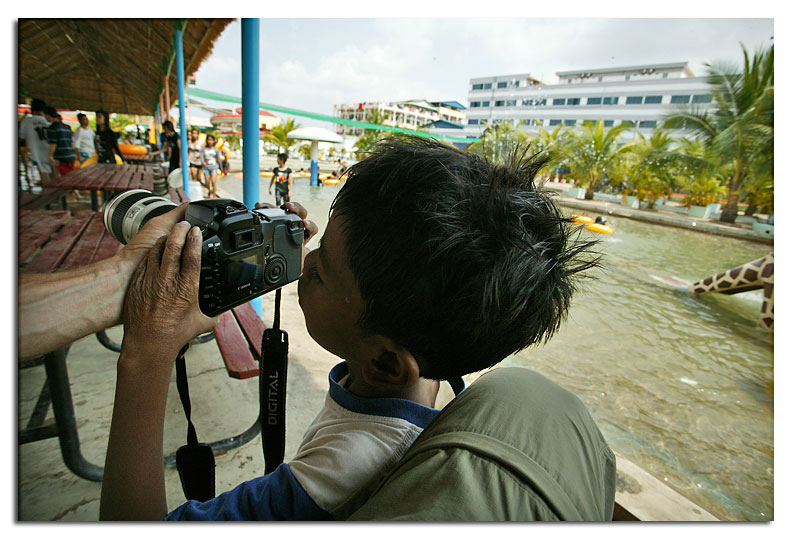 That evening we took two of the older boys out to dinner at a tapas restaurant called Friends. This is a training restaurant where former street kids and orphans can learn to cook for the booming hospitality industry. Though Tapas may sound a bit overblown and fancy, it allows the student chefs to cook across the range of international cuisine, from Khmer Curry, pad Thai, beef with peppercorn or chicken enchiladas. This better leverages them into a broad range of career possibilities.

After dinner they headed back to Palm Tree and I sat in front of the National Museum and watched another great soccer game. Sure, once the ball disappeared down a hole, presumably the sewer, and the smallest boy had to be lowered down by his armpits so he could fetch the ball up with his feet.