From there we walked, first through fairly well to do middle class neighborhoods, but they quickly gave way to absolutely squalid low stilt houses in lanes of trash. Scott had lent me a pair of galoshes and, even though they were several sizes too small, I was thankful for them. We squelched through puddles and across heaps of trash. Scott knew every child there, and he knew their families and living situations. He could point out a particular child and, after enthusing on that child's merits, he would add commentary on their families.  "The mother there is pure evil, alcoholic. Beats the kids. Demands money for us to take the kids back after she yanks them out of the orphanage so they can earn her money for wine."   At one house we stopped at, he talked with a small girl in Khmer for a bit and then made a call on his cell phone. "Somethings not right here. She's one of our best student and she's not in school and she won't let me see inside."  Poverty,alcoholism, malnutrition, child abuse, and worse things. These are the living conditions here.

He introduces me to one child, tiny, tiny, too tiny, and says "Her father died last year. It was the best thing that could have happened for the family." Scott show no remorse for those who have put these children in harm's way. 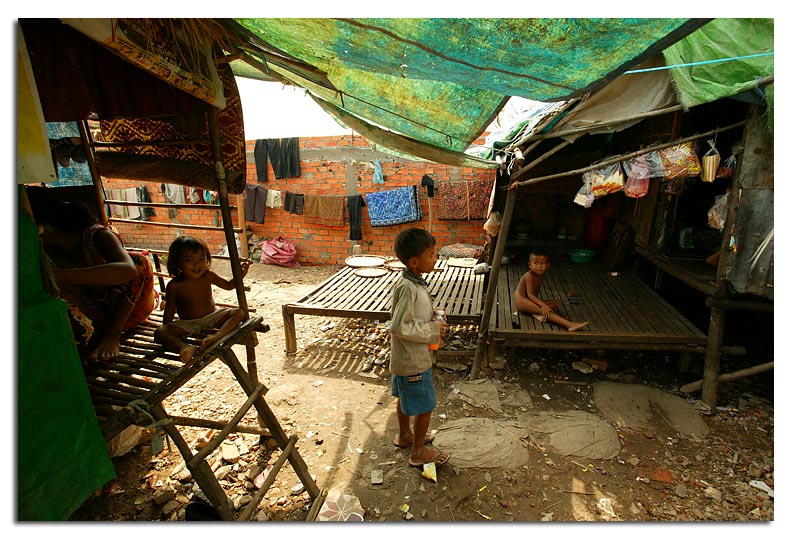 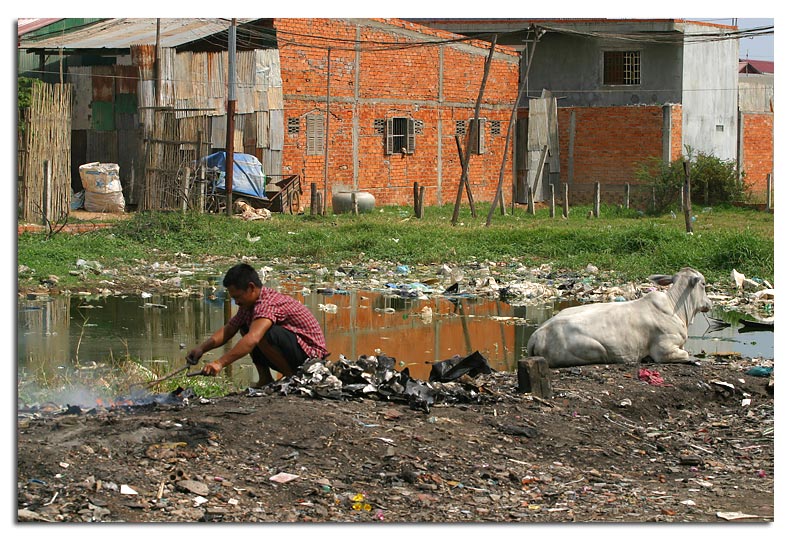 The stench is overwhelming. Ducks, chickens, dogs and children all forage off of the ground. We are not yet in the dump. Scott points out a small, fetid pond, which looks more like an overgrown puddle. "They catch fish out of there."  I can't imagine anything being able to live in there. 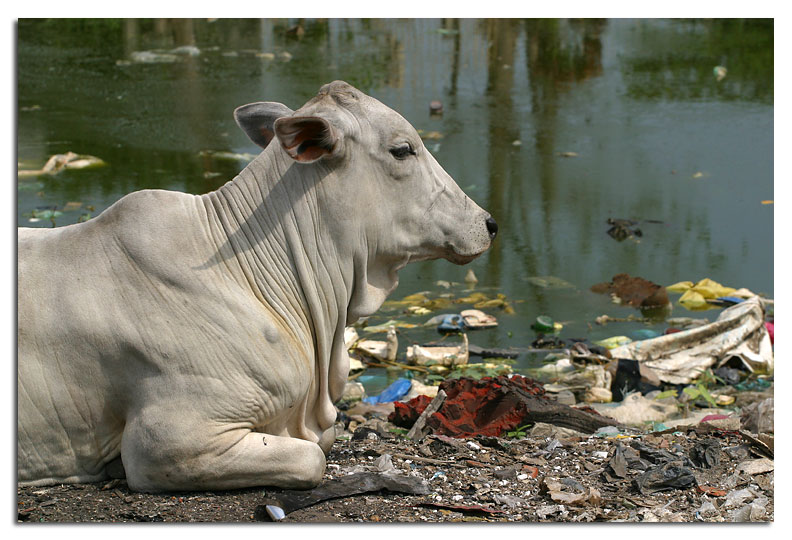 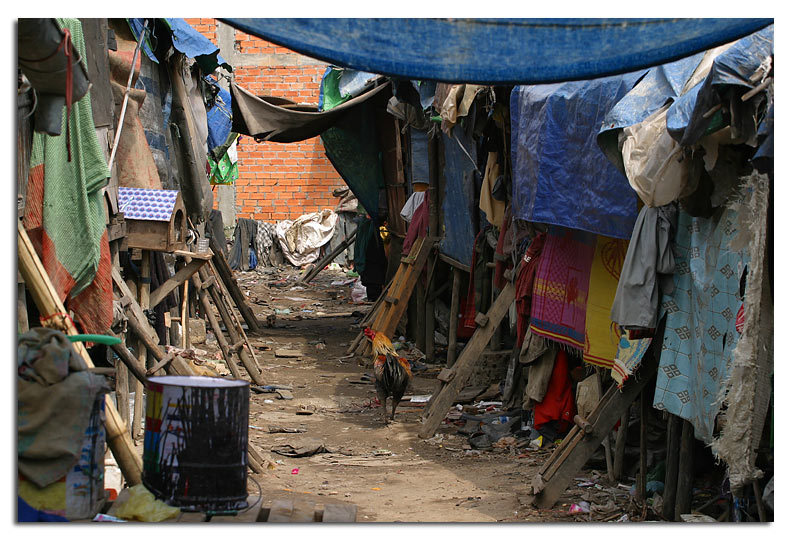 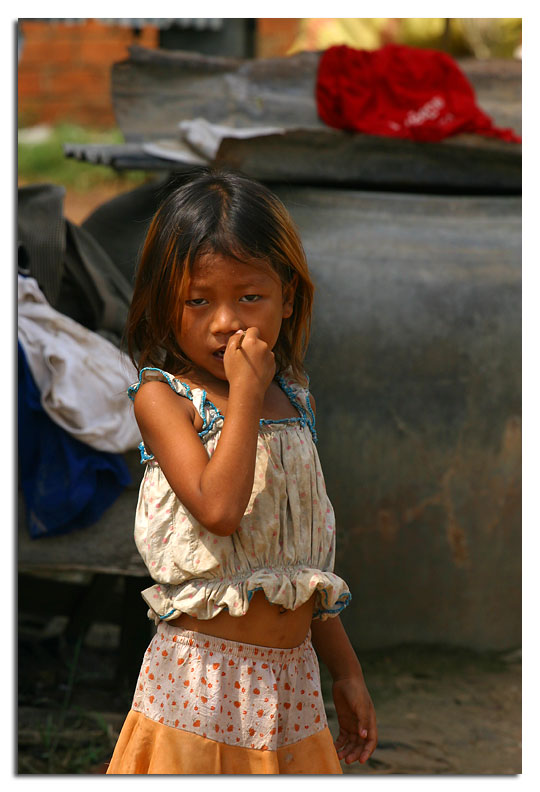 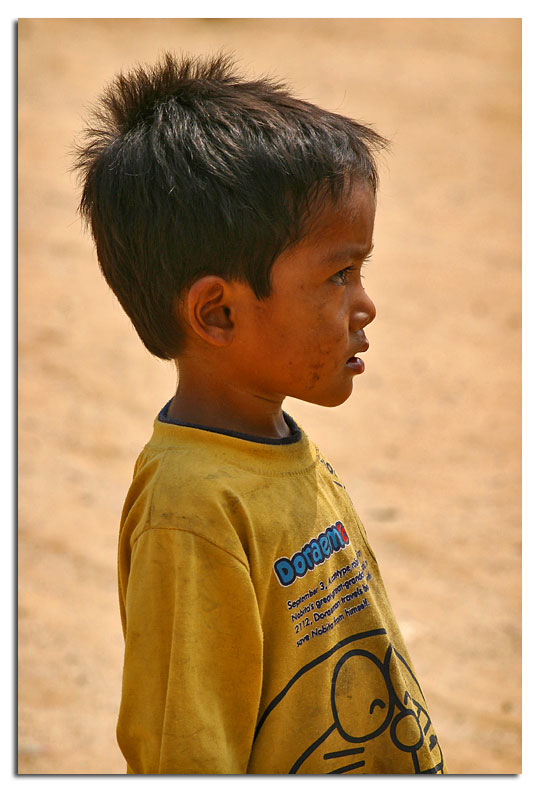 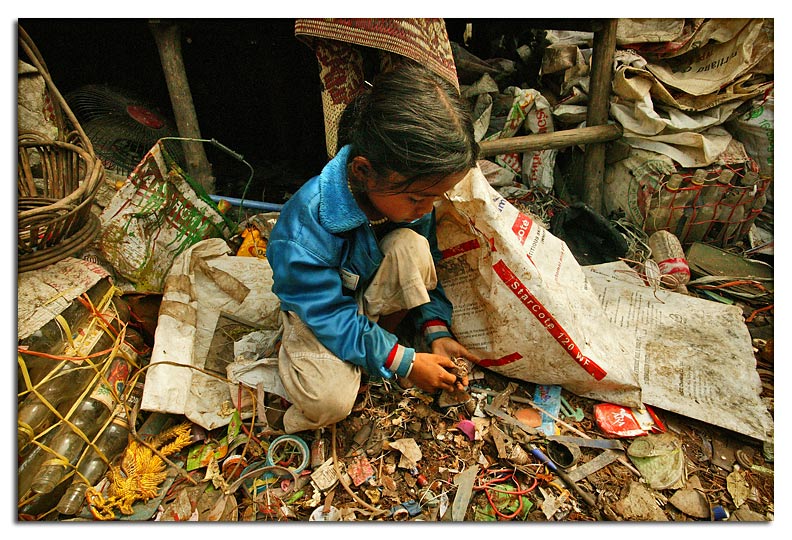 Outside of one of the houses, in a narrow alley, I stoop down to talk to one of the little girls.. She is mute, expressing none of the knee jerk happiness that I have seen in so many of the Cambodian children.  Down in the mud between her feet she pokes at the broken end of some metal bauble. 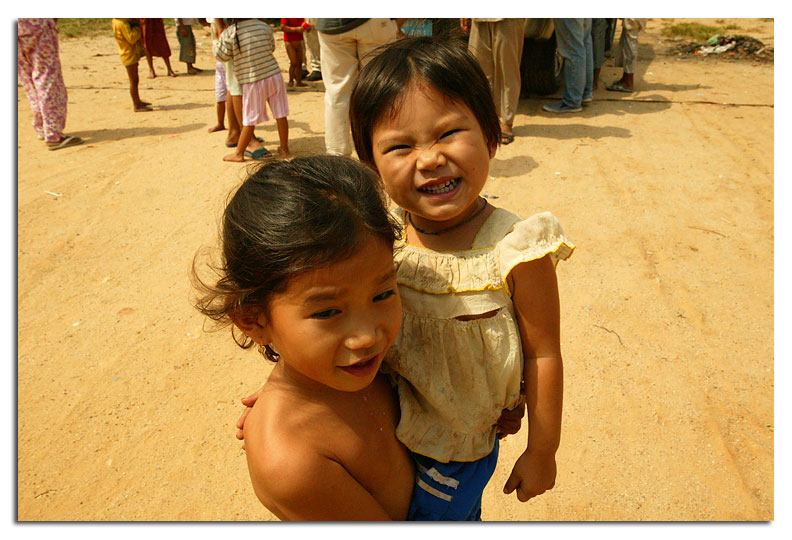 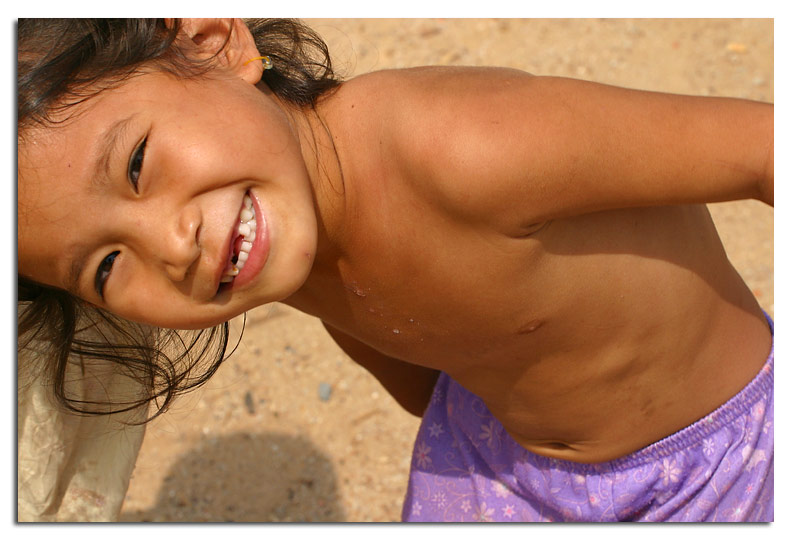 Many of the children have prominent scars, on their arms and chests. Burn scars. Parents punish their children with lit cigarettes.  Scott also points out the hammocks filled with sleeping men and the groups of men gambling at cards.  "They laze away the day while the women and kids are out working." 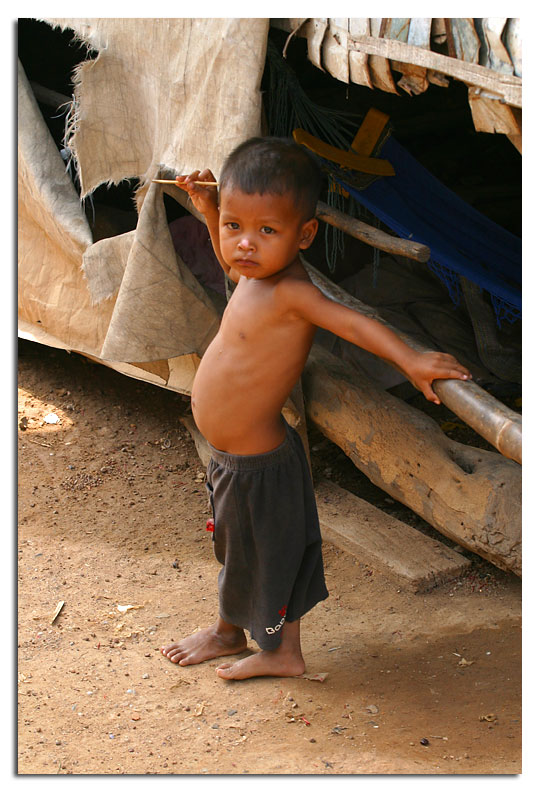 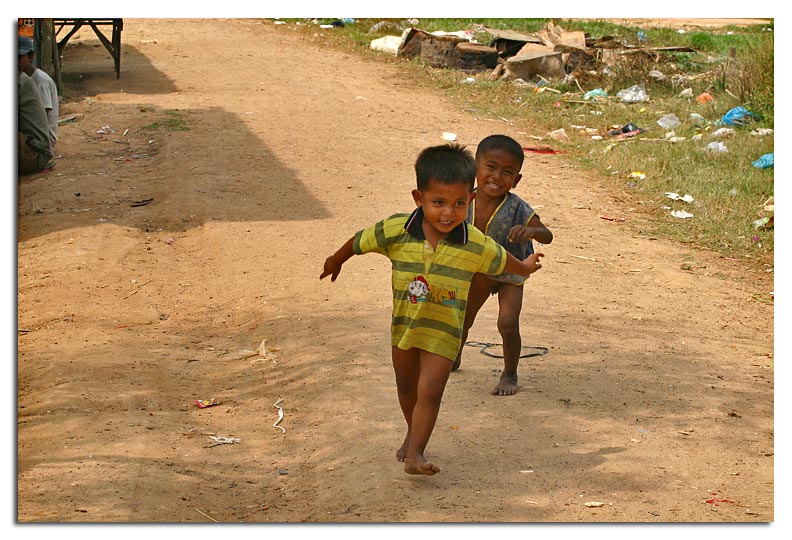 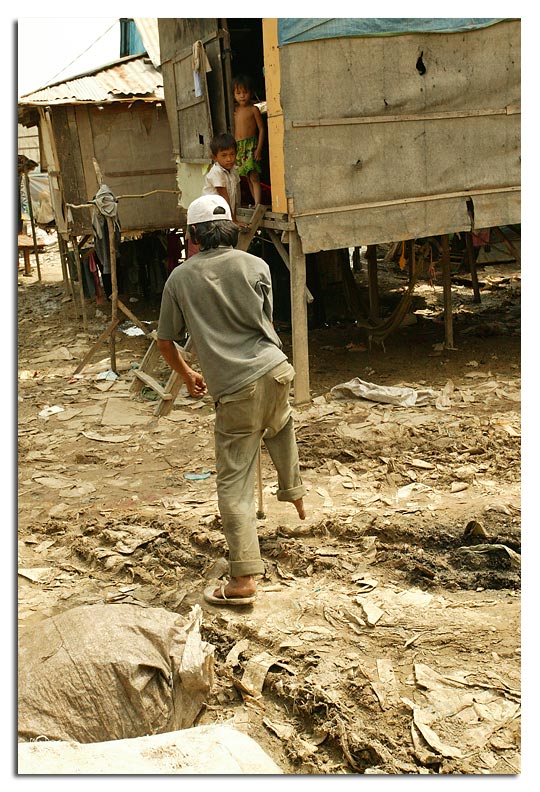 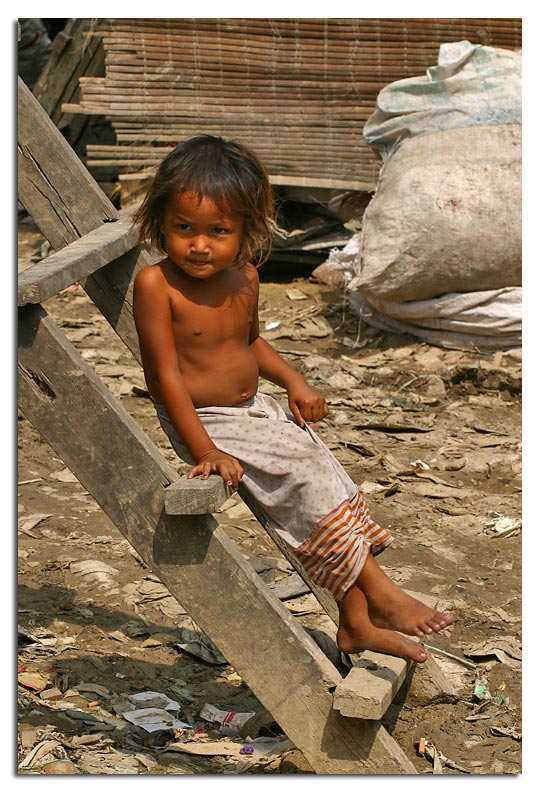