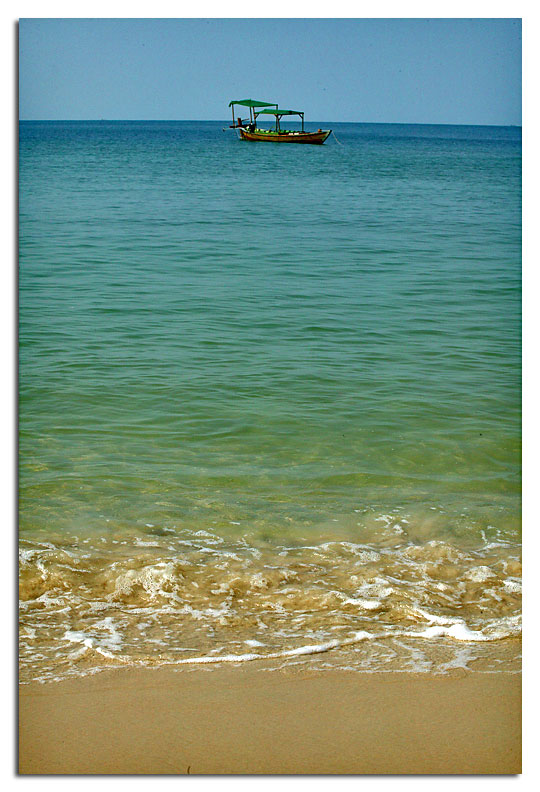 I had awakened before dawn that morning, outside of my hotel was a bus full of energized Cambodian orphans. All fired up to go down to Sihanoukville, for an excursion to the beach. 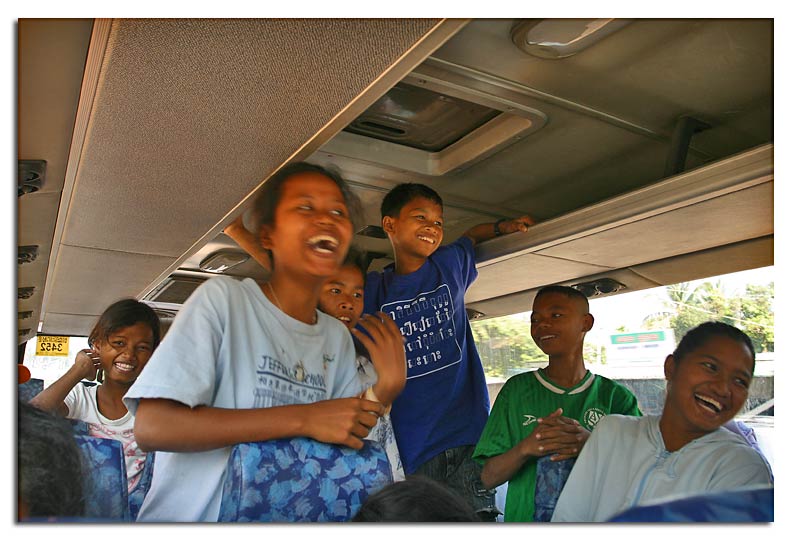 We swam, and played volleyball, and boules, and relaxed. It is wonderful, it feels decadent, but what is decadence here? The kids have taken to me immediately, and it must look a bit strange for the other western tourists to see a procession of a hairy, scary looking gringo, hand in hand with a passel of Cambodian children, walking down the beach. One small boy has proudly taken on the important task of carrying one of the cameras, the 1ds. I can't help but relate the price of that camera to what an average Cambodian earns in a year. But I put such thoughts out of my mind as quickly as they arrive. That way madness lies.

We walk and talk, the kids are all eager for my attention. One of the girls wants to wear my bracelet, another peppers me with questions about where I am from, how many brothers and sisters I have, how old I am.... 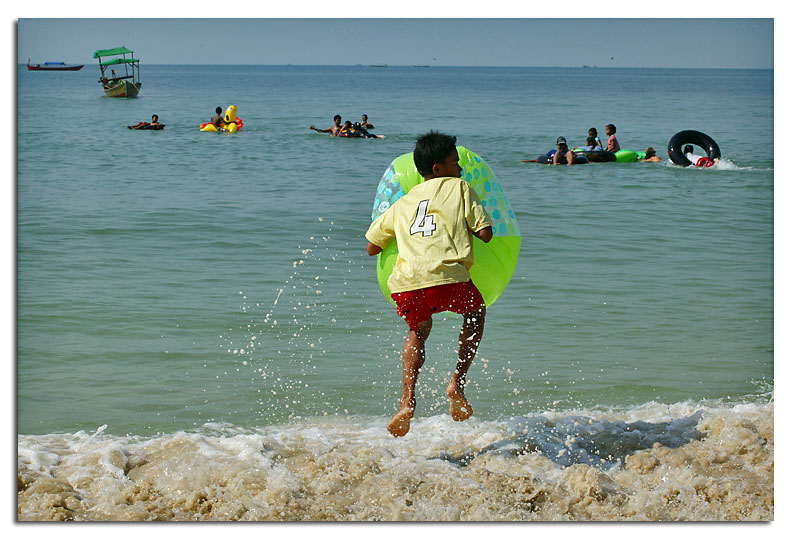 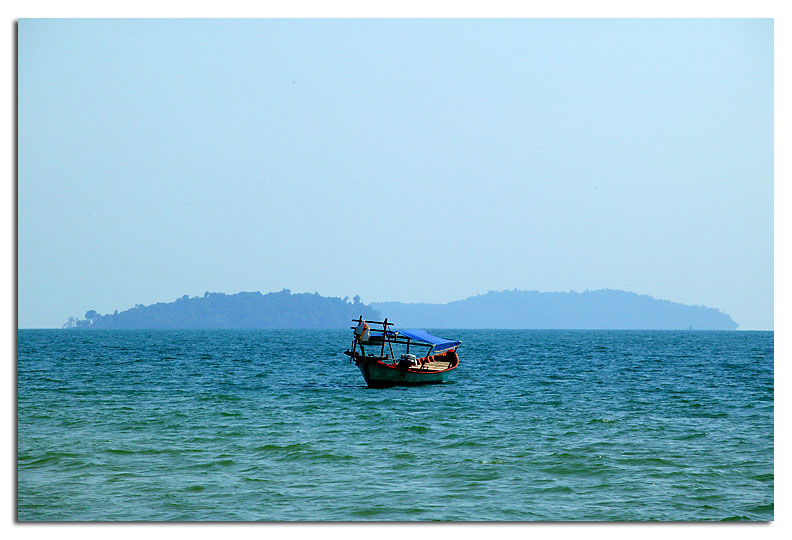 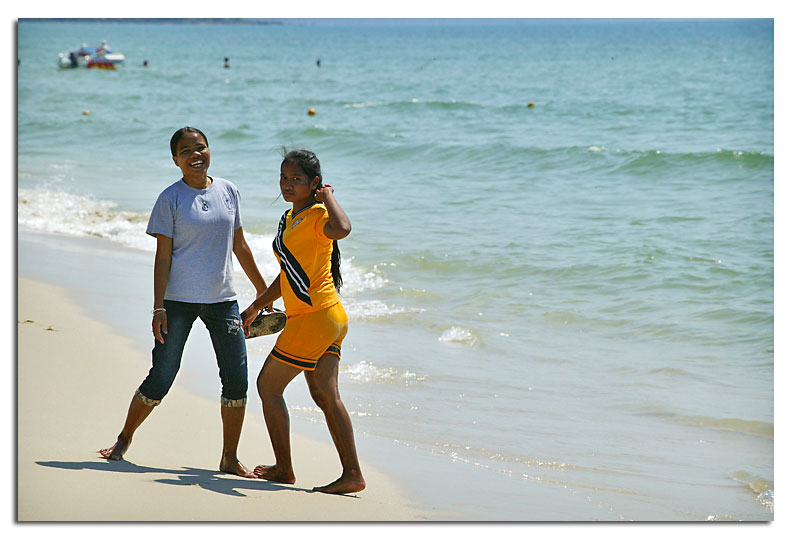 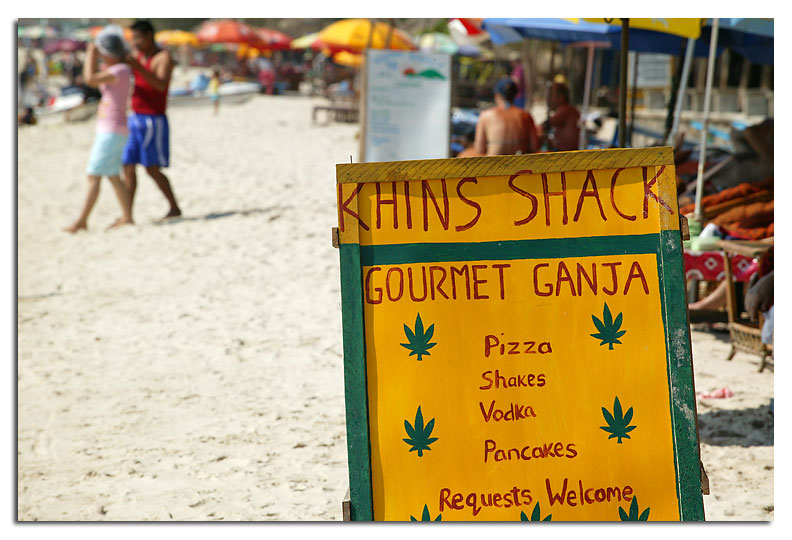 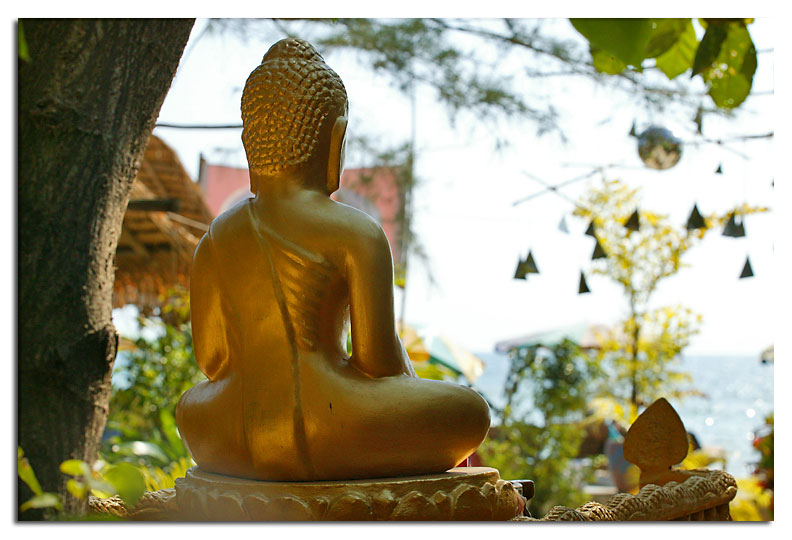 I should backtrack and explain how I got here.  Early, early that morning (4 a.m.) I responded to an apologetic knock on my door. It was Jen, one of the volunteers at the orphanage, there to tell me that we were ready to go. I was already awake, lying there in that travel daze, so I packed my stuff up in a hurry and went outside. Parked up the street was a bus full of children, after many enthusiastic greetings (in which, by the way, I was reduced to Tony, Anthony being too hard to pronounce....) we set off out of Phnom Penh to the coast.

The kids kept up a happy chatter of singing, laughing and games. As we were heading out of the capital, everyone else seemed to be heading in. Trucks with the beds packed full standing with girls heading to the garment factories. Kids going to school, walking or pedaling too-big bikes.
We left the city and continued south through mist hung rice paddies and past houses on stilts. Mountains looming in the background, palm trees dotting the foreground. We stopped at a roadside shrine to have the bus blessed, and again at a stand to buy bananas and mangoes for snacks.

And so, after stately progress, we arrived at the coast. Terry, one of the sponsors of Palm Tree Orphanage, leases some land from the government on the beach in Sihanoukville, he in turn rents it to some French Ex-Pats with the understanding that the kids can show up anytime and use the half of the property devoted to volleyball, boules, and lounging. The other half is a proper beach side shack bar, with a thatch roof and a variety of lounging apparatus. This, I thought, meets my needs perfectly.

And that is how I came to be walking down the beach, answering any and all questions posed by the kids. The natural inclination is to ask questions of your own, but I resist. How do you ask an orphan if they have sisters or brothers? Or about their family?

Some of the boys found a crab and proudly show me their new treasure. I had a beer and listened to the rush of waves, I look at the jungle clad islands looming off shore. There are a few fishing boats moored out past the surf. People walk up and down the beach selling food, or trinkets, their wares in yokes or balanced on their heads.

The feeling of not having studied for the test, has, for the moment, abated. 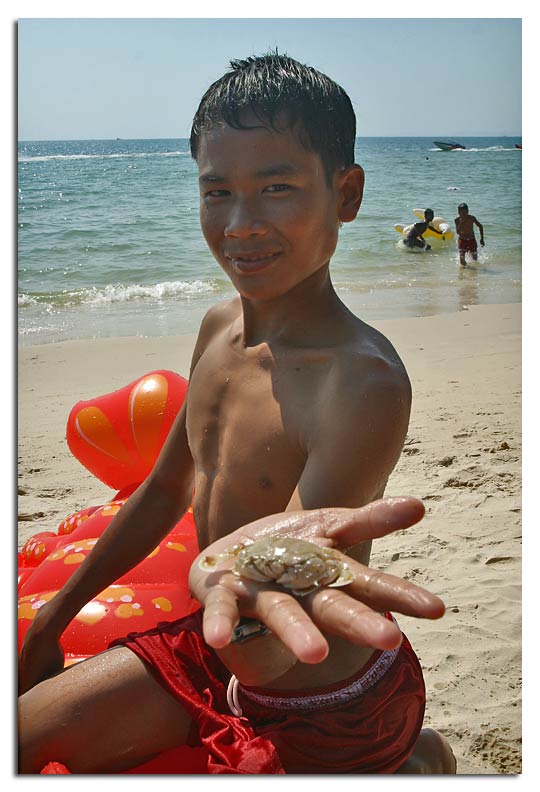 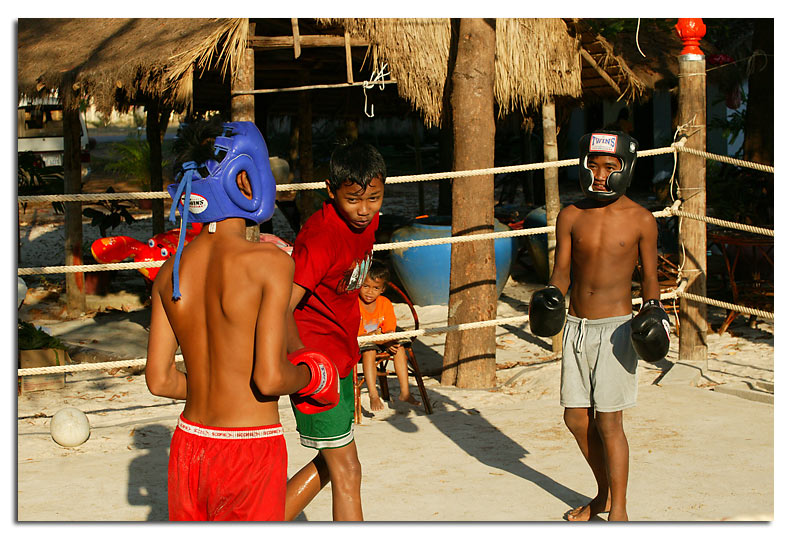 Boxing. The boy in red appointed himself referee and did a fantastic job of mediating the melees. Separating the combatants when things got too thick, but still allowing them to whale out some of their frustrations. The kids are open and friendly and there is a subtle hierarchy afoot, wherein the older kids look after and discipline the younger ones. Not in any sort of spiteful manner, but with a gentle inclination towards the common goal. There are no fussing, or tantrums or squabbles.  Just a readiness to be happy, enjoy the moment.  In almost every place I went in Cambodia I found this same feeling. This sense of being in the moment and happy about it. I will never be able to express how wonderful this is. 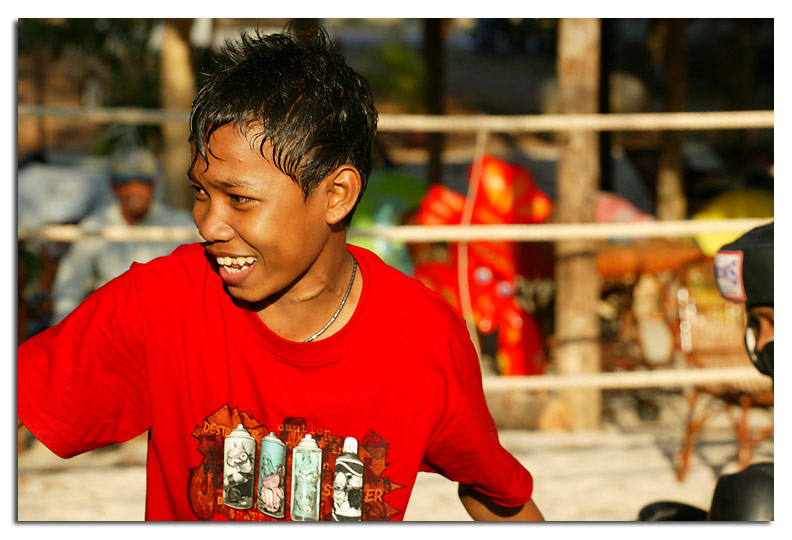 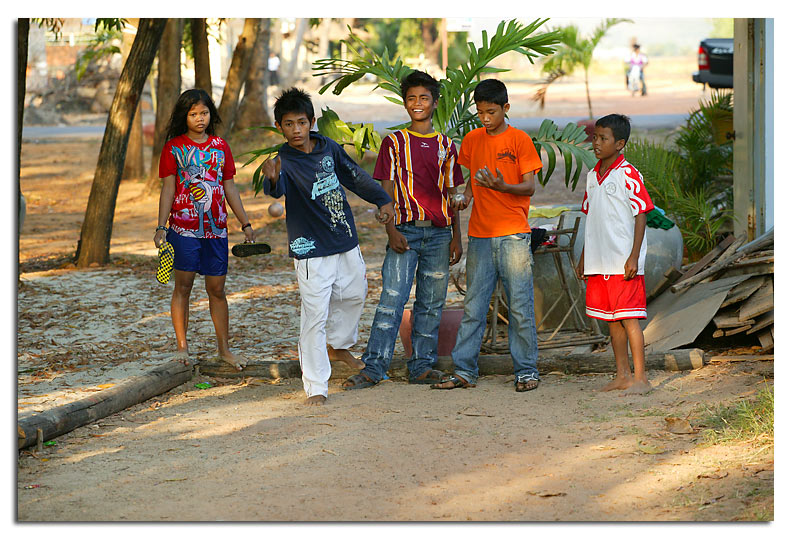 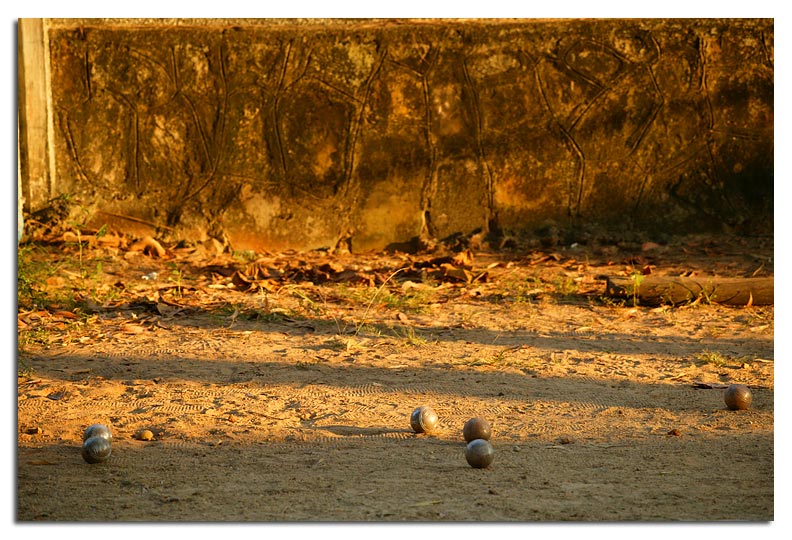 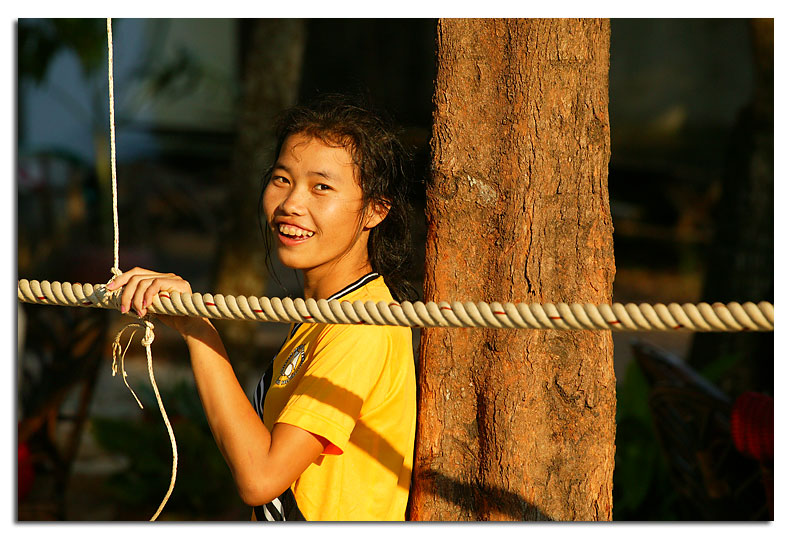 I have real trouble with the names here. They absolutely do not stick in my mind. I ask on of the girls to write her name in my journal and she eagerly complies; in neat print she writes "Rathsieng Srey Mom" She asks me to write mine and I do so. She frowns at my spidery handwriting and says to write it again, like hers, lowercase. 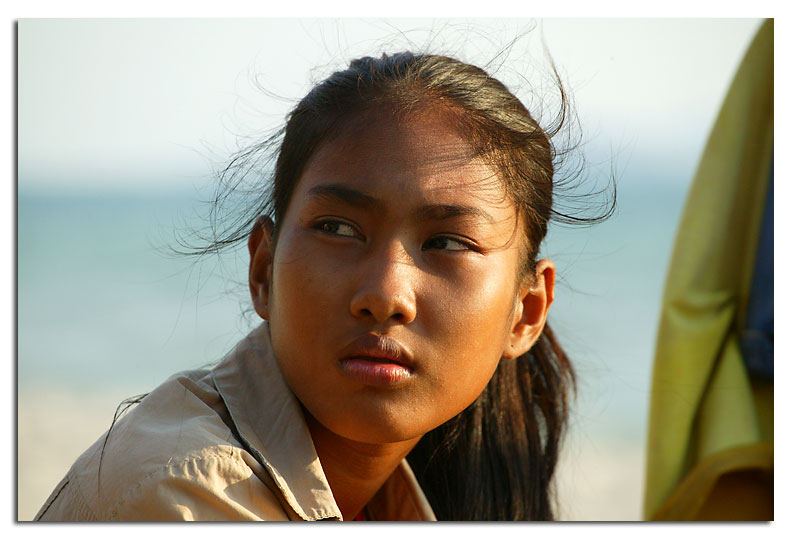 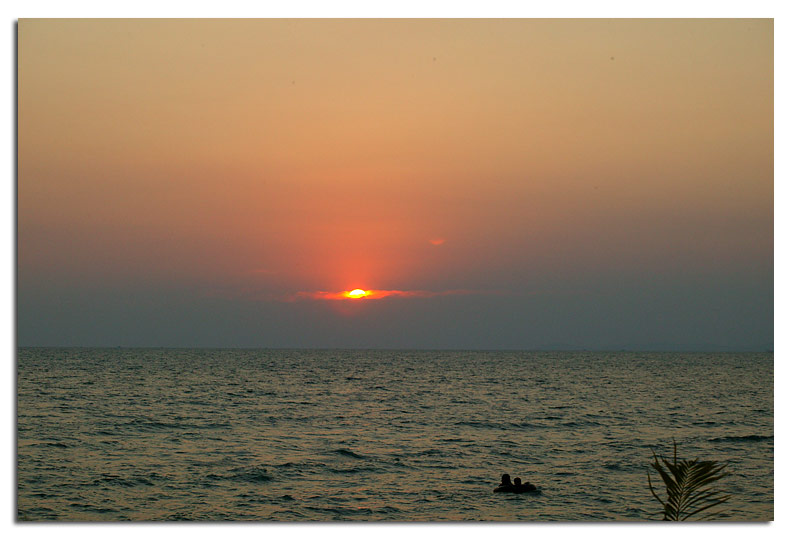 We brought lunch in from the market; rice, fish head soup, some vegetables, and some strange little sausages that I couldn't bring myself to try.

After a fairly perfect day of beach relaxation we put the kids to sleep in their guesthouse and grabbed some pizza at a surprisingly good Italian restaurant/shack.