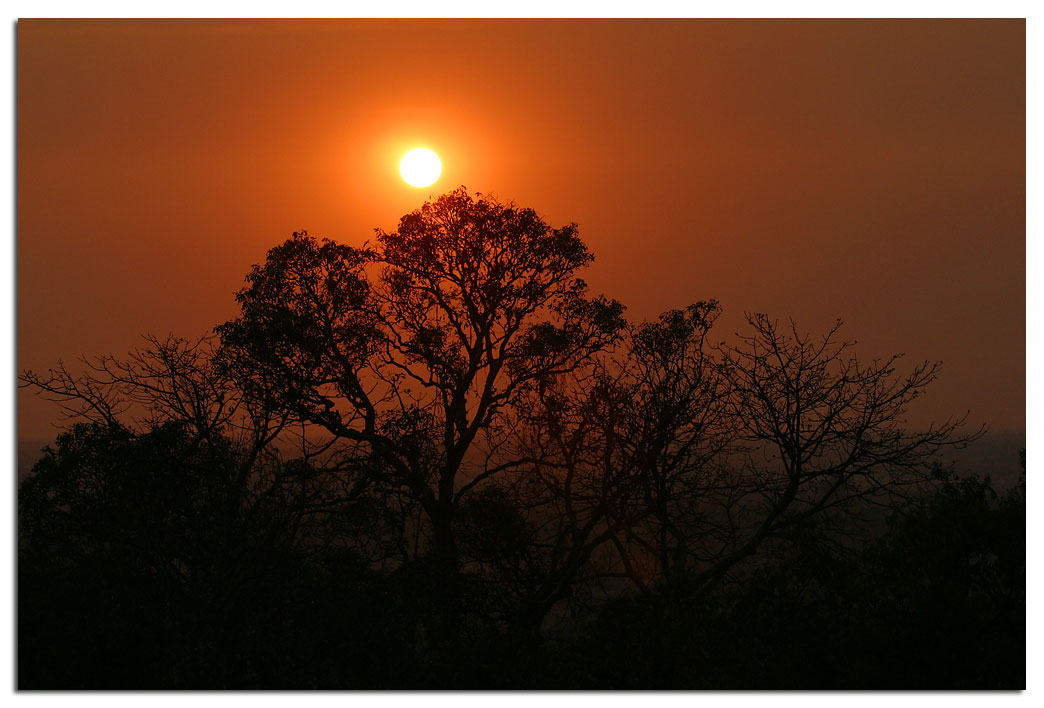 I arrived in Siem Reap and checked into my hotel. Took a quick but refreshing shower and then hopped into a Tuk-Tuk to see the temples.  I wish I had the time here to adequately explain what Angkor is, and what it means, and provide some contexts. But for now, a thumbnail sketch will have to do. Angkor is the center of the Khmer Empire, which ruled much of Laos, Thailand, Cambodia and Vietnam from the 9th to the 15th centuries. When London's population was 500,000, Angkor had a population of over a million. There are hundreds of temples spread out across an area of 1,150 square miles. For reference, this is the exact number that forecasters have predicted that the Denver area will expand to by the year 2020.

Though the vast majority of this ancient megalopolis was made of wood and other impermanent materials, spread across the region are hundreds of stone temples, constructed by the Khmer god kings in an effort to outdo their ancestors. The temples themselves are stunning, and many of them have absolutely exquisite carvings. Scenes of war, agriculture, daily life, gods, animals. Assei (wise men) and Apsara (dancers) are repeated themes across many of the temples.  We went past Angkor Wat, commonly believed to be the largest religious building on the planet. (203 acres) and is a combination of the standard temple mountain and walled enclosures, with a big moat around the whole complex. 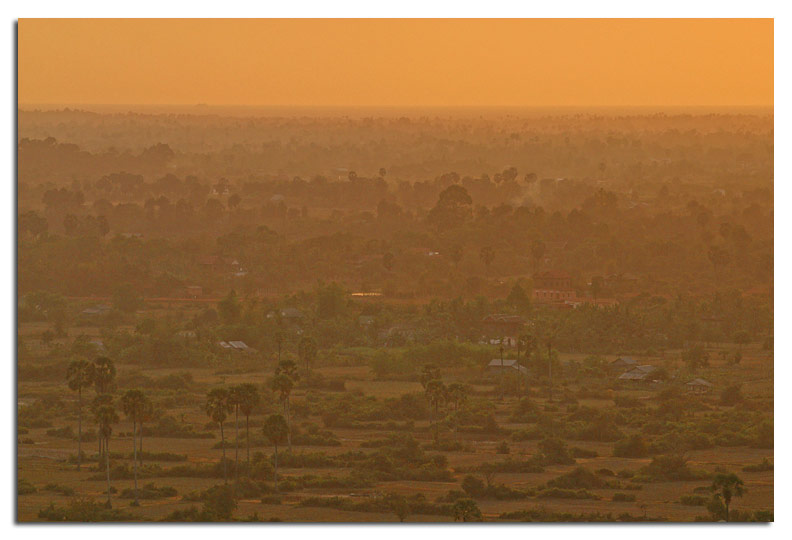 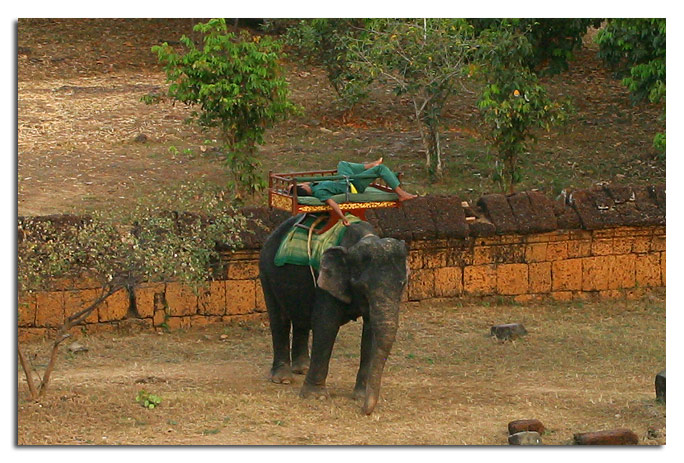 Yes, you can nap on an elephant too. 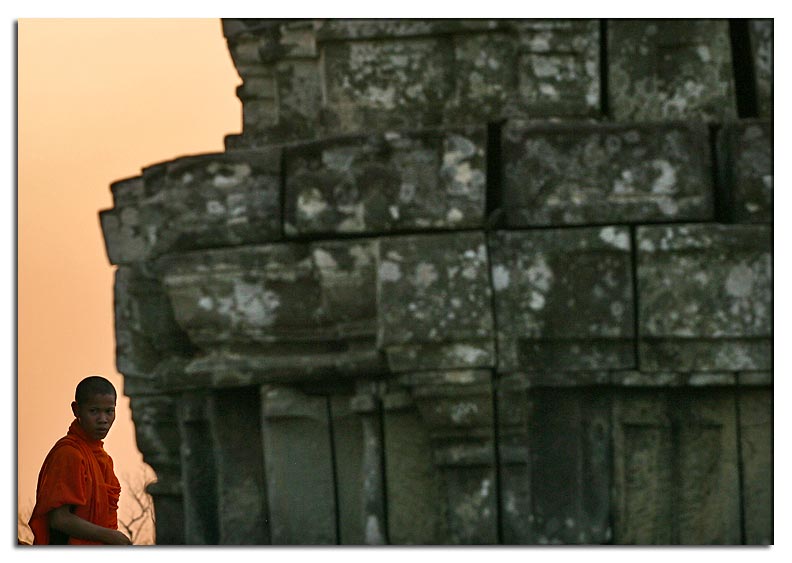 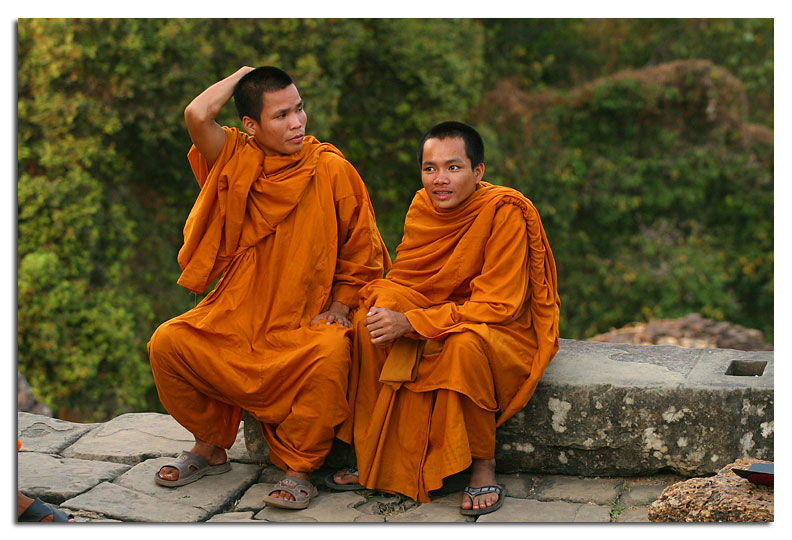 I climbed up to the top of nearby Phnom Bakheng to see the sunset, which was a lovely swath of red orange across the western sky, over the rice paddies of the Cambodian countryside.  Phnom Bakheng was cut from the rock that formed the hill, then faced with sandstone.  It is an impressive, and massive place.


"It is difficult to believe, at first, that the steep stone cliff ahead of you is, for once, a natural feature of the landscape, and not one of those mountains of masonry to which Angkor so soon accustoms you. The feat of building a flight of wide stone steps up each of its four sides, and a huge temple on the top, is a feat superhuman enough to tax the credulity of the ordinary mortal."

HW Ponder, Cambodian Glory, The Mystery of the Deserted Khmer Cities and their Vanquished Splendor, and a Description of Life in Cambodia today) Thornton Butter worth, London, 1936)

It is quite a trek to get up to the top. And there were crowds there to take in the sunset. In the back of the tuk-tuk, puttering through the darkness, heading back into town. Somewhere, deep in the jungle off to the right, something screams.

I headed back into town for dinner at an absolutely crazy restaurant called Dead Fish House. Picture a three story high structure, with the inside comprised of a series of platforms set at varying intervals. Each platform has a low table and cushions and are all connected by a series of steep stairways. There are no guardrails or handrails. A drunk's nightmare to navigate. The food was great though and even a couple of king sized bottles of Angkor Beer did not prevent me from making safe egress. 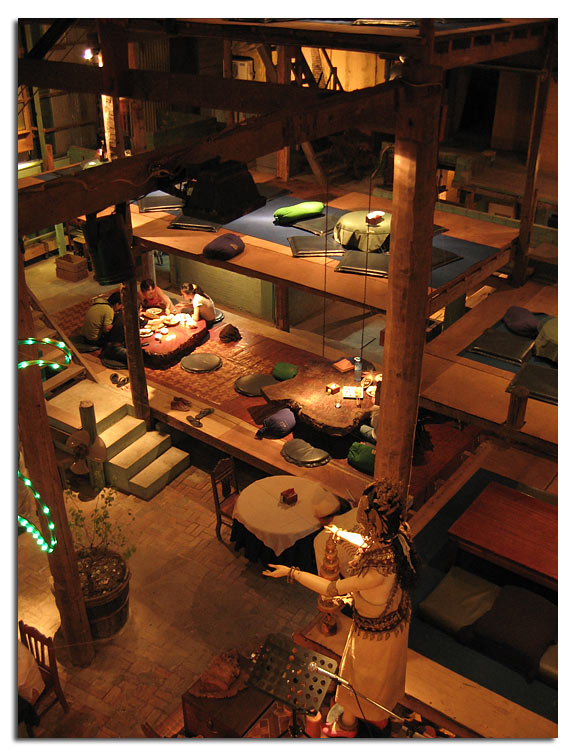 I had another beer at an outside patio bar and watched the moon rise, huge and pumpkin orange above the palm trees and wondered what the kids were up to.