It is hard to sort your way through the fog of preconceptions and biases when setting foot in Africa for the first time, especially when you are winding out a 30 hour run with no sleep.  Morocco seems like a fairy tale land when you begin talking about it. Images of leather, spices and deserts come to mind. The names excite the imagination. Casablanca, Marrakesh, Fez. And it is Africa, which makes it seem all the more exotic and adventurous.

Granted, Morocco is but a mere slip of Africa. Nerf Africa, but a toe hold is a toe hold.

This is the land that bounced out Carthage, Rome, the Ottomans and the French. Only the Arabs succeeded in holding sway over this area, and they cheated, they had a pre-existing desert fetish, not to mention a tidal wave of religious fervor that just so happened to make sense to the native population, the Berbers.

At any rate, it was with a heady mixture of giddiness and jetlag that I laid eyes on, and trod upon Morocco. Though the first several hours were spent in the dehumanizing and culturally antiseptic environment of various methods of mass transit, the essential otherness of the place made itself readily apparent. All of the signs were presented in Arabic and French. Two languages that I have no foundation in.  The cultural vernacular expressed itself even in the airports and train stations. Mosaics, fountains, the faceless yet exquisite repetitions of Islamic art. The train station even had a prayer room. I felt like had truly arrived when I heard the Muezzin’s call to prayer slithering towards the railway platform. 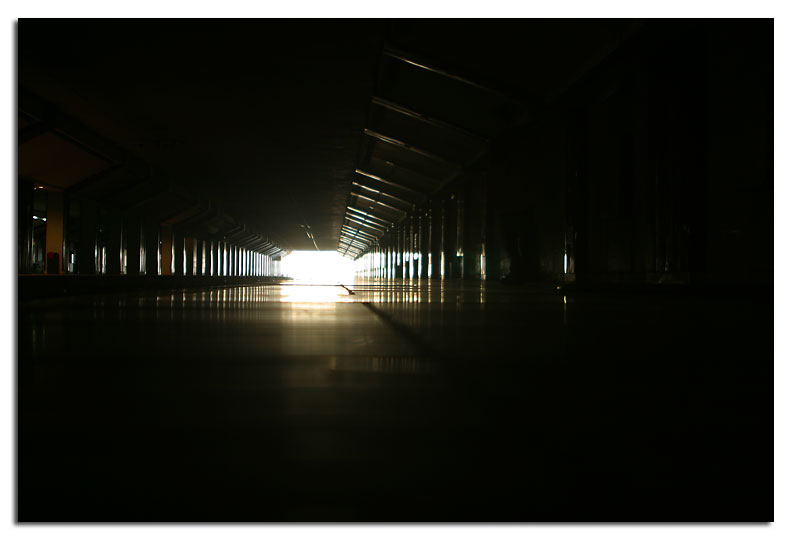 From the rail station under the airport, somewhere out there is Morocco.


Pretty much the first thing we did in Morocco was to screw up the railway system. From the Mohammed V airport just south of Casablanca it is quite easy to access O.N.C.F., the Moroccan national railway system. (Belgian construction, smooth rails, one of the useful legacies of the French “Protection” of Morocco) There is, in fact, a train station right underneath the airport. As the airport is a dead end line, it was necessary to board a train to Casablanca, and then switch trains to get on the Marrakesh Express. We embarked upon this plan, and soon we were at the L’Oasis train station, just south of Casablanca. It was sunset and we could hear the call to prayer from various nearby mosques. (It all sounds devastatingly romantic doesn’t’ it? Flying into Casablanca…boarding the Marrakesh Express?)

Unfortunately for this reverie, as well as our frazzled nerves, when the conductor (A man for whom power is neither easily gained or surrendered) took our tickets he nearly threw them back at us. He barked at us in French, adding a few choice words in Arabic (a caustic, scratchy language perfectly suited to expressing utter contempt, the French adding a high note of disdain) we had, as it turns out, erred. We were not headed to Marrakesh, we were trundling towards Agadir. Our fellow travelers looked at us with sadness. It was obvious from their expression that it was at once amazing that that anyone could goof up something as simple as a railroad, yet not at all surprising that a couple of honky tourists could pull this off. Luckily for the tattered remnants of our national pride, they most likely thought we were French.

What happened next was amazing, and, as we were to find out, very Moroccan. The conductor, with an imperious “Moment!” (which translates (loosely) from French as “wait here you idiots!”) disappeared into the into the engine to converse with the engineer.  I figured they were going to determine where the next truly awful neighborhood was and deposit us there. The conductor reappeared and shortly after that the train slowed to a stop. With more gestures than words, we were admonished to follow, and we meekly hopped off the train onto the gravel, and thence onto a northbound train, which had just stopped right next to ours. The Moroccan railway had ground to a halt because we were on the wrong train. On reflection, I realized that it was not contempt with which the conductor regarded us, but rather with a bemused impatience. We were like puppies that had just soiled the rug. Exasperating, yes, but we just couldn’t be expected to know any better and we were too cute and helpless to beat.

The conductor had a brief discussion with the northbound conductor, and it was expressed to us in English that we were going to be taken back to the train station at L’Oasis, and that the next train for Marrakech would be through about an hour after that. I’m surprised that they didn’t pin our names to our collars.  As an added flourish, we were allowed to retain out original tickets to Marrakech. 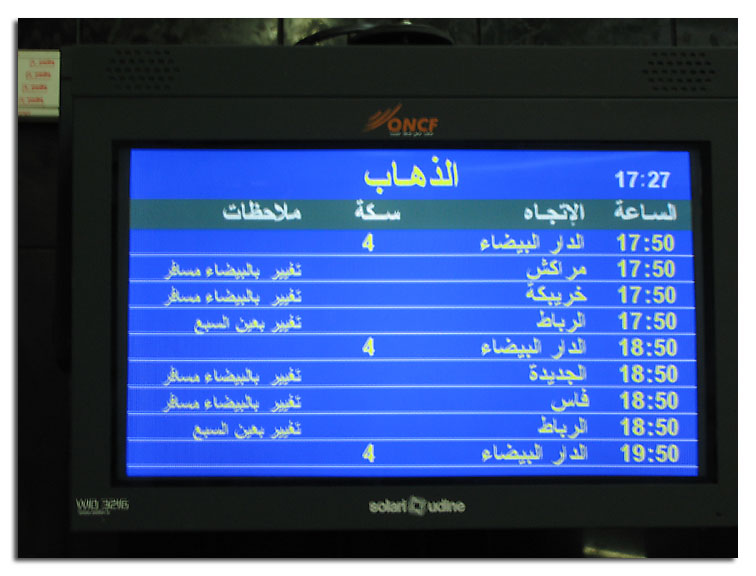 This was an amazing introduction to the culture of Morocco. They could just as easily, heck, more easily have ejected us at the next stop and left us to fend for ourselves. But instead we were given a do-over. Reset like a fresh pinball, ready to be played again.

From there we proceeded to Marrakesh without incident, and found a hotel room near the train station at the Hotel Farouk. Our room was pretty much paved with beds. 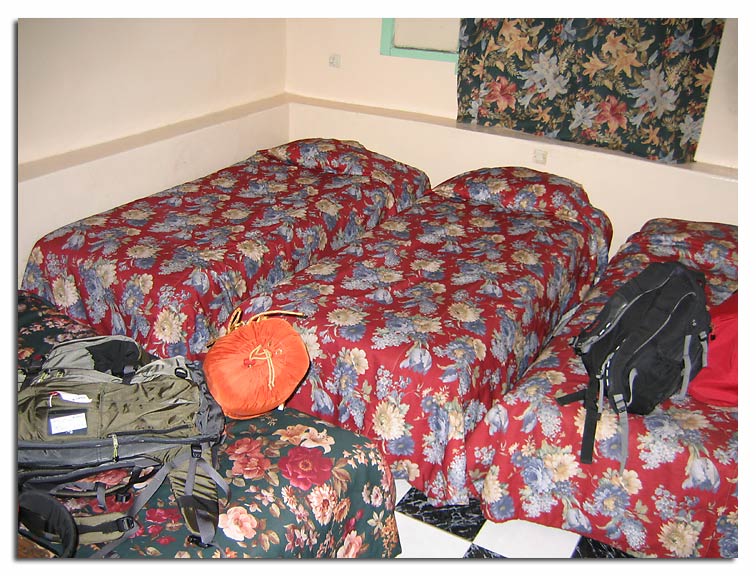 At around 1:30 a.m., after about 28 hours of traveling, I sank into blissful sleep. The call to prayer awakened me shortly before dawn. I snoozed it and woke up a few hours later somewhat refreshed. Our room was off of a rooftop terrace and I stepped out there to get a look at Marrakesh. 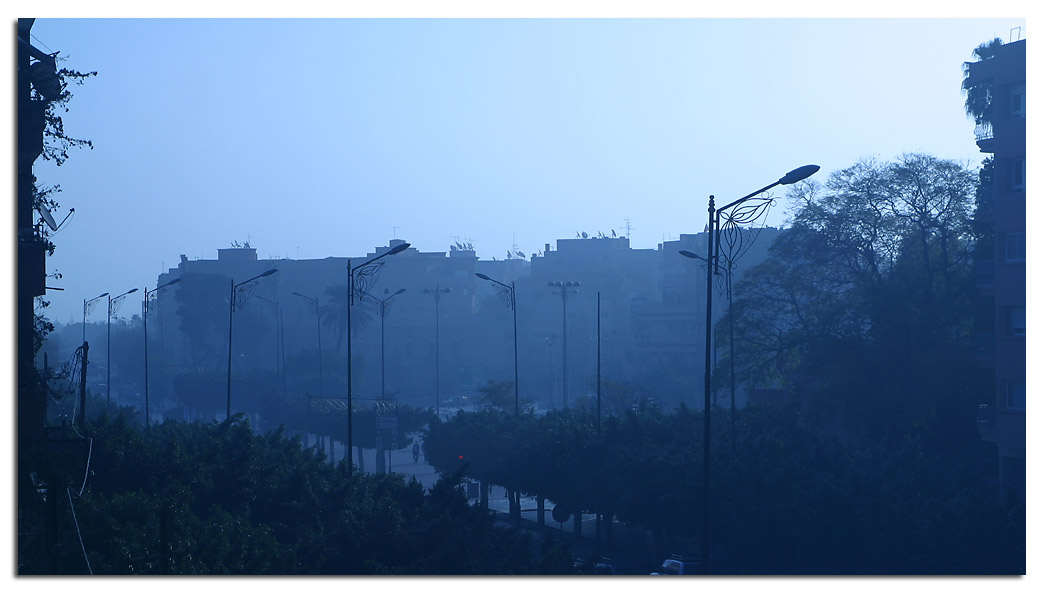 Satellite dishes, orange carts pulled by mules and donkeys, mopeds, taxis, this is the streetscape vernacular of Marrakesh.

In contrast to the Arab influence of the north, Marrakesh is a very Berber feeling city. (Berbers being the native inhabitants of Morocco) The city has long been a center of power for the south of Morocco, the “Bled es Siba, or “land outside governmental control.

This is probably as good of a place as any to insert a brief primer on the way cities are laid out in Morocco. The Medina is the original Arab part of the city, walled for protection, and endlessly interesting due to their mazes of alleys and medieval feel. Within the medina are various quarters. Residential areas, mosques, medersas (theological colleges) and Souks, or Markets, themselves organized into distinct areas, 1.e the dyers souks and tanneries, potter’s souks, carpenters, blacksmiths, leather, jewelry, brass, babouches (slippers) vegetable markets, meat markets, poultry…

Outside of the medina, thanks largely to General Hubert Lyautey (The military Governor of French Morocco from 1907 to 1912, then the Resident-General of French Morocco from 1912 to 1925) are the Villes Nouveaux. Lyautey is often admired for his “saving” of the old imperial cities of Morocco. “Do not offend a single tradition, do not change a single habit” was his stated policy. As noble as this sounds, it was a bit of a shell game. In Fez, the Fassis were no doubt surprised that their 1000+ year old city needed saving at all, and by imposing preservation on the medinas and moving all bureaucratic and governmental functions to the Villes Nouveaux (Geuliz in Marrakech, where we slept the first night) Moroccans were left politically high centered, making for the easy frenchification of the country.

Regardless, it is nice that the old medinas were not plowed over, and their presence is certainly a huge tourist draw.

This in mind, the short walk from our hotel in Geuliz to the medina proper represented a stroll backwards in time.  We passed through the city walls, and scores of orange trees in full fruit. 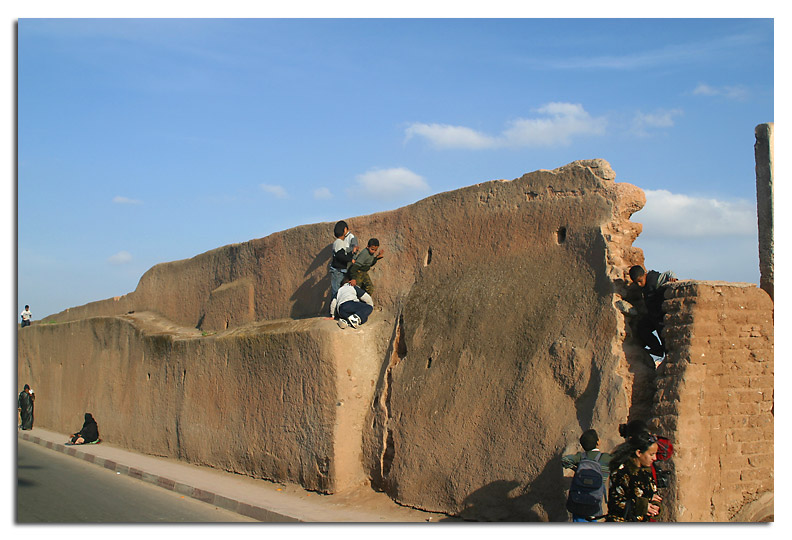 Mohammed V, the main street in Marrakech (In fact, the main street in every town in Morocco) was full of mopeds, mules and taxis. We passed the Koutoubia mosque, built in 1150 AD, this mosque and minaret established the classic Moroccan design, a 1:5 ratio of width to height. Elias Canetti had this to say about minarets, “They are slender, but they do not taper; they are the same width top to bottom, and what matters is the platform in the sky from which the faithful are called to prayer. A minaret is like a lighthouse but with a voice for light.” 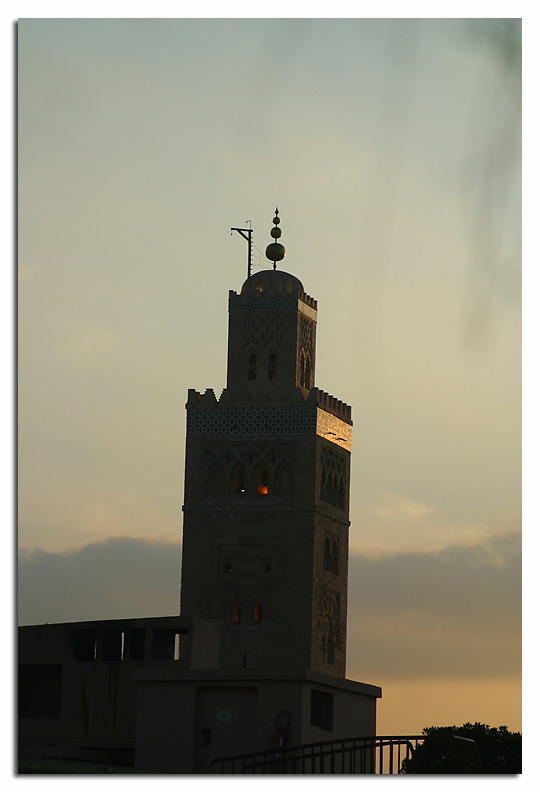 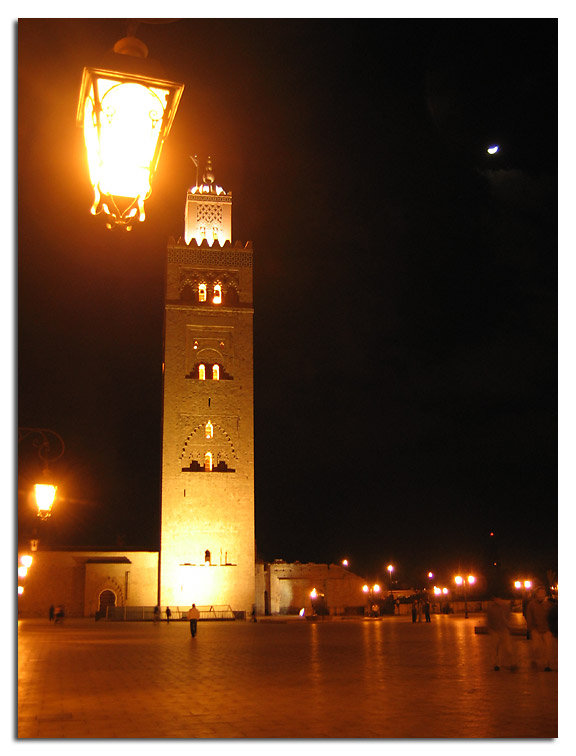 From there, after a short detour through an anachronistic alley devoted to Mercedes Benz repair al fresco, we arrived at the Marrakech medina, founded in the 9th century. 2000 meters, 1000 years of history.