We arrived just before sunset, in the town of Sefrou. Touted by guidebooks as a charming, low-key alternative to Fes. We found it to be medium key and low temperature. There are exactly two places to stay in town. We opted for the Hotel Sidi Lahcen Lyoussi. It is a mouthful, but I want you to remember that name, because if you ever find yourself in the town of Sefrou, Morocco, I implore, nay, demand that you seek out the other option. We were charged higher than the high season rate for an absolute refrigerator of a room. And of course there was no hot water in the shower. We had a lackluster meal at the nearby Cafe-Restaurant Oumnia and called it a night.

The next morning we arose early, opened up the door to the balcony so some of the cool morning air could waft into the room and warm things up. I ran the water in the shower for a while on the forlorn hope that maybe the hot water heater was far away (Mauritania, perhaps) but no joy. There was just the sensory illusion of the water starting to feel warm until I switched hands and found that yes; it was still in fact at about 33 degrees. Goosebumps and all, we packed up and strolled down to see the medina. Sefrou’s medina is interesting. Wholly untouristy and completely strewn in garbage, it ends up feeling a bit more real, somehow, than the medinas of the larger imperial cities. Sefrou is actually a bit older than Fes. Symbolically, this town represented a number of transitions, such as the transition from the desert side of the Atlas to the green side. It also was a southern outpost of the Bled el Makhzen – the governed lands. So we were out of the Bles es Siba and back into the civilized north. It also represented the beginning of the last few days of our trip. From here it was a few days in Fes, then endgame. 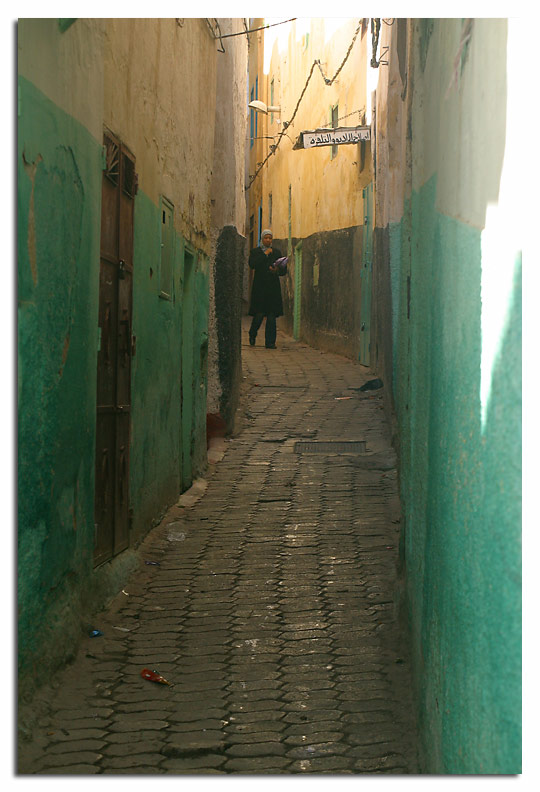 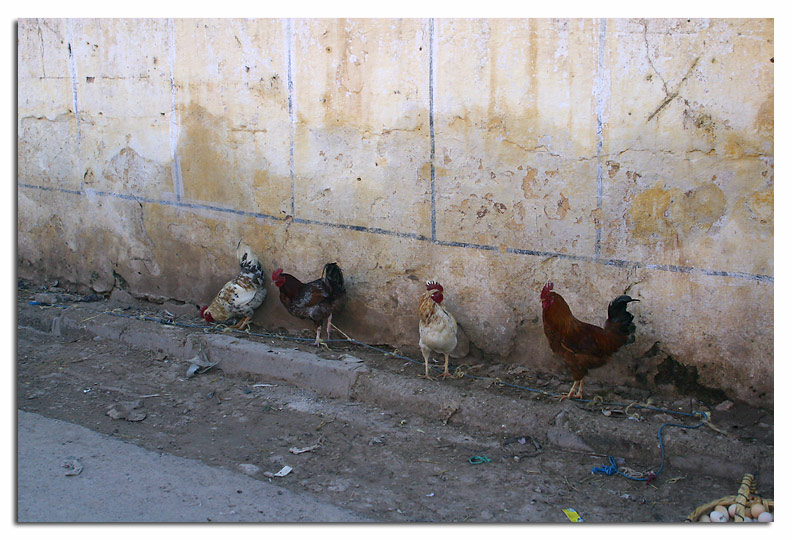 We pushed northward, through olive groves, and into Fes. Fes is the oldest of the Moroccan imperial cities, founded in the 8th Century, and to me it felt the most medieval. Put simply, aside from tourists and a few western goods in the shops, Fes felt like journeying back in time 10 centuries. Within the 600 walled acres of the medina city of Fes el Bali (the largest urban center in the world that is completely closed to cars, by the way) are 250,000 inhabitants, 9400 alleys, 200 fountains, 200 medersas, and 320 mosques. Little wonder then, that UNESCO has thrown its hands up in the air and declared the whole thing a world heritage site. Unlike colonial Williamsburg, where real actors in real costumes portray the town as it was 200 years ago, Fes has real people who are living their lives just as they were lived 1000 years ago.  Fes is a warren of alleys populated by mules, handcarts, and cats. Fes is also a city of cats. Cats skulking about Mosques and medersas, waiting hopefully at meat markets, napping under stone carvers benches. 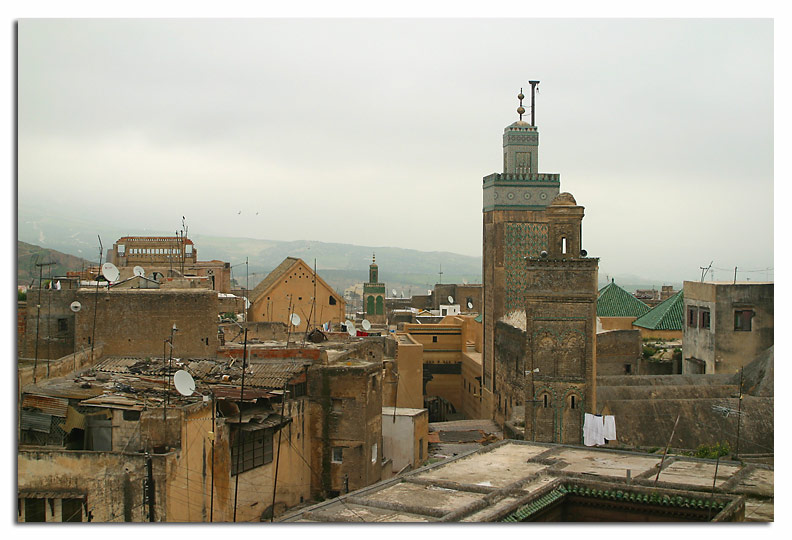 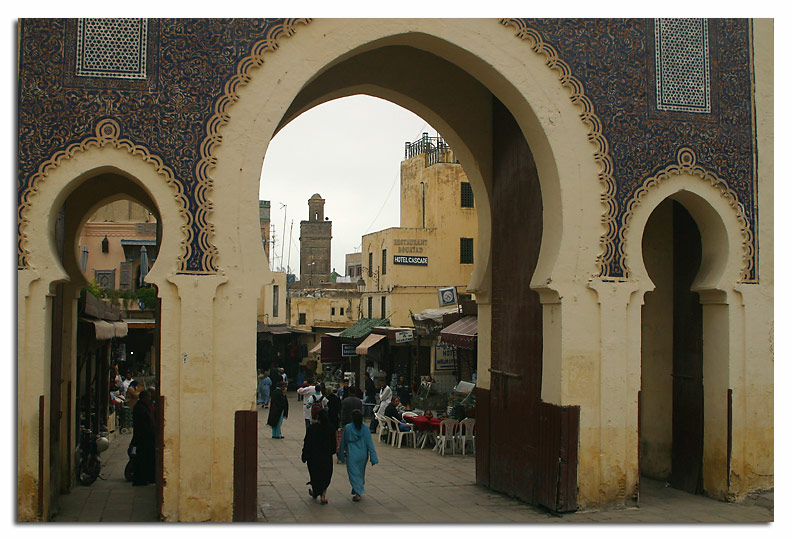 The Bab Boujeloud, the western gate into the medina.


We found a place to park the silver camel for a few days and secured lodging at the Hotel Cascade, just inside the Bab Boujeloud. $10 bucks a night, hot showers, a nice terrace: luxury compared to the icy tomb of Hotel Sidi Lahcen Lyoussi in Sefrou. Like we did in Marrakesh, wandering at random was the best way to go about things here. "Losing one's self", the statement is such a cliche that we often don't remember what it really means. Here it is possible to lose one's self both physically and temporally. For the photographer to become just a lens, a point of observation. Rather than trying to explain Fes further, I'll present it as it presents itself. 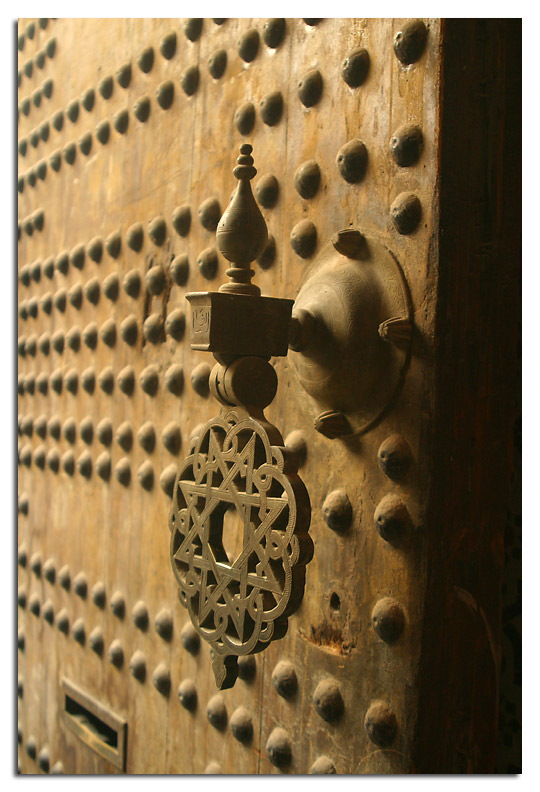 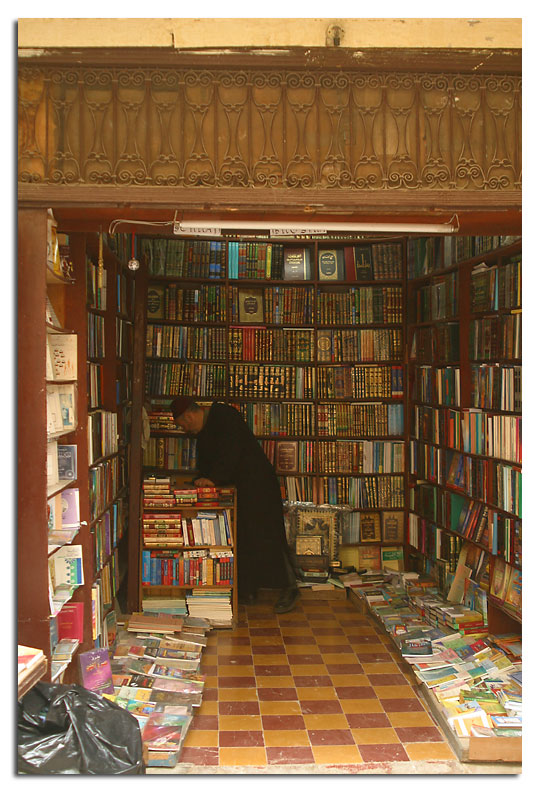 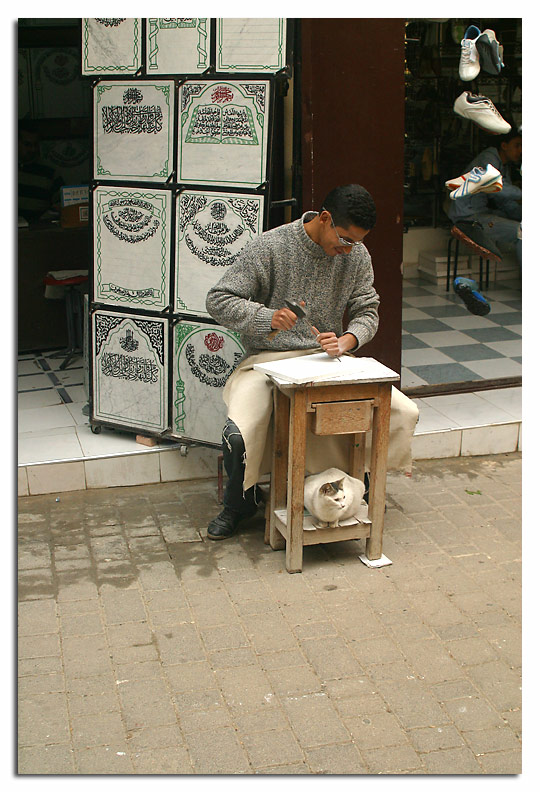 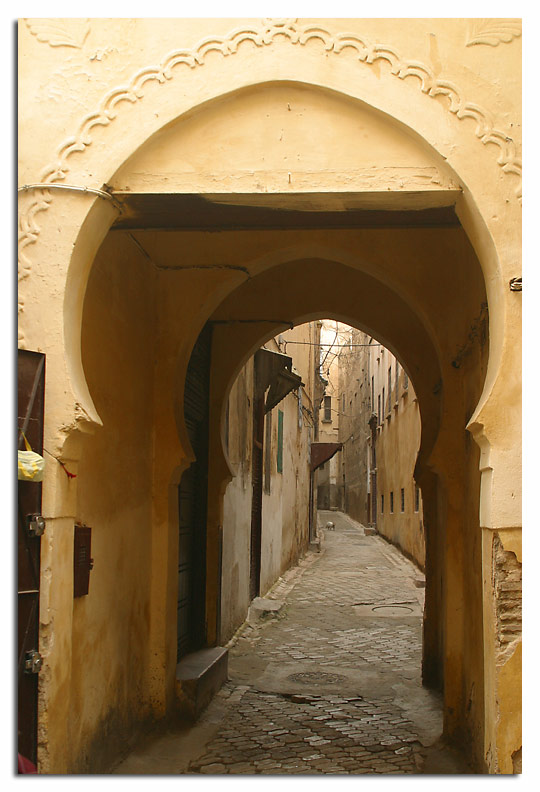 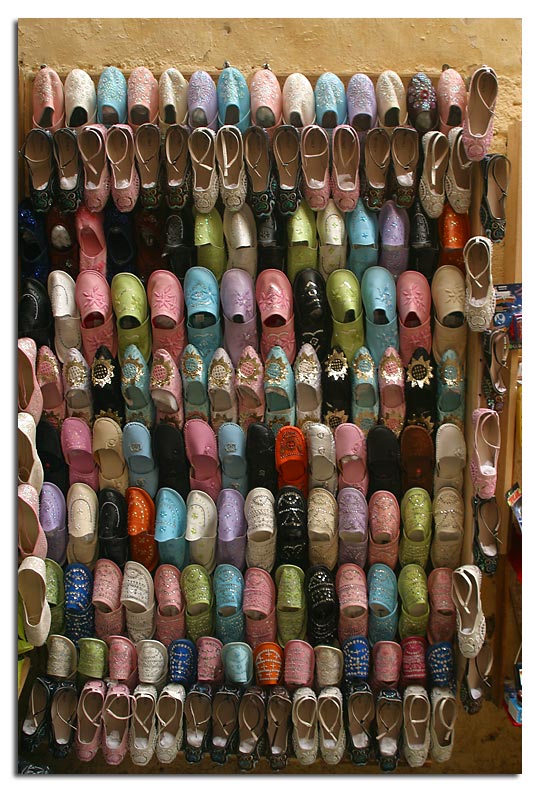 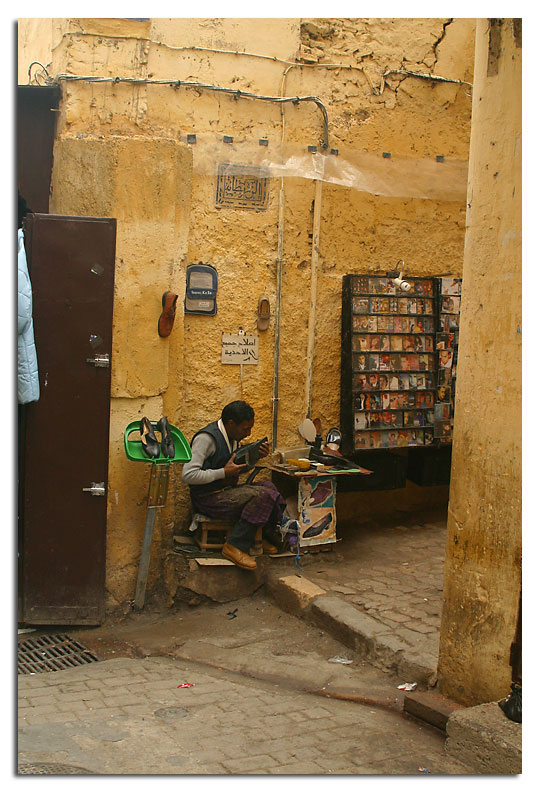 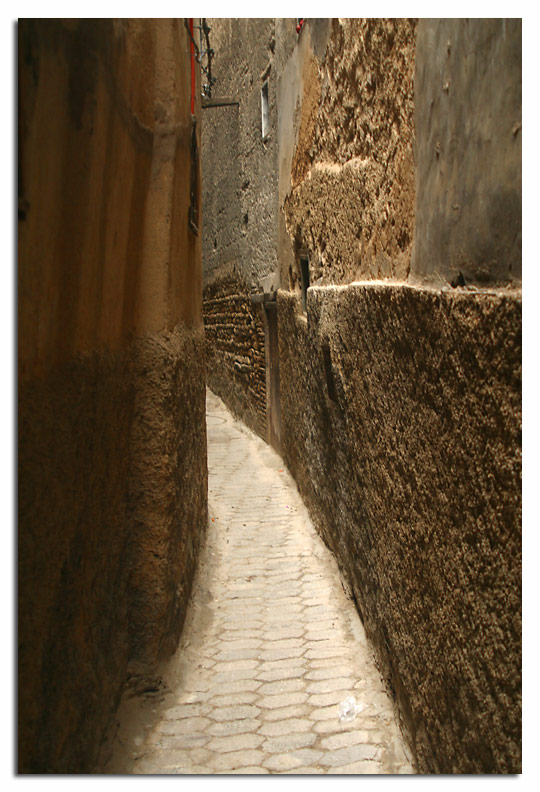 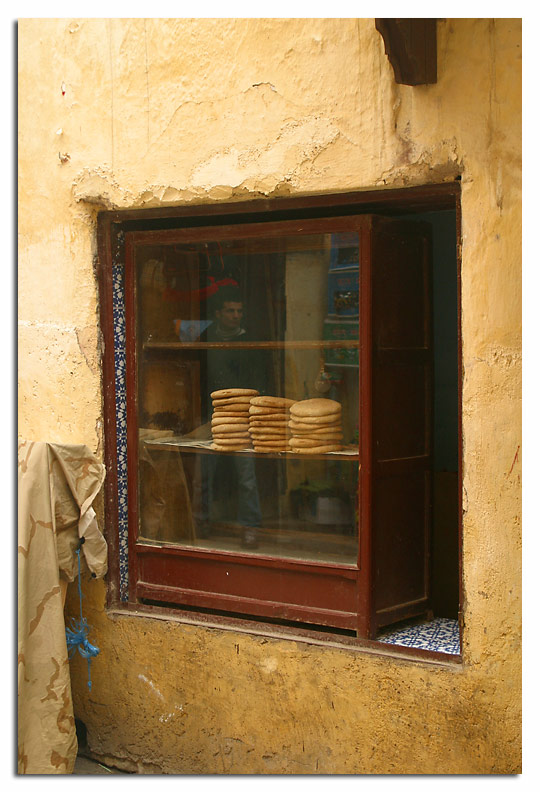 The standard issue bread of Morocco, round, flat, fresh and tasty.