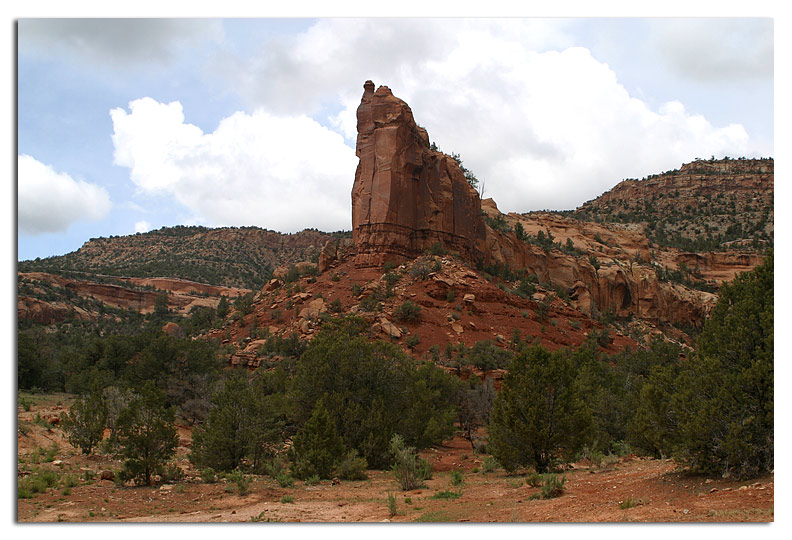 Friday morning, 10:30 A.M. We loaded up bikes on the Xterra and headed over to our friend J.D.’s house where we met up with a crew of about ten riders. After a brief meet and greet, we loaded back up and headed south out of town towards the Escalante Canyon, but not before passing several things that at the time seemed interesting, but in retrospect were OMENS of IMMINENT DOOOM.

We had to stop in town to make way for ducklings. A mommy duck was shepherding her li’l ducklings right across the road in front of us, and when they got to the curb they were to little to hop up over it, but they kept trying. They kept flinging themselves against the curb even though it was pointless and futile. I would like for you to keep this image in mind.

Finally she headed down the curb towards the handicap ramp at the sidewalk. Hooray A.D.A. Your tax dollars at work.

Then we saw a teddy bear just abandoned in the road. It wasn’t a pink or blue or otherwise garish stuffed animal, it was a classic brown forlorn teddy bear. This was a powerful omen that we blithely ignored. Then we had to stop and wait for the world’s longest and slowest train, and it was slooooowwwwwlllly going by and kept going slower and slower and right when it was about three cars from passing the crossing it stopped completely. Then it started going backwards. This too was a powerful omen…and this too was blithely ignored. We turned around, drove back past the abandoned Teddy Bear and headed out to the trailhead.

The ride was going to be a 30 mile loop, starting with a 15 mile, 2800 foot climb on jeep road, at the top of the climb we were going to traverse the top of a mesa on another jeep road to access a 12 mile singletrack descent. We began the ride at around noon.

It started out well enough. It was a nice social climb, with several good viewpoints along the way. Almost right off the bat as we were all riding along together we passed a big mud puddle and Pete roared through it right next to J.D., splashing the both of them liberally with mud. This in it’s own way, was the most pointed of the OMENS of IMMINENT DOOOM. 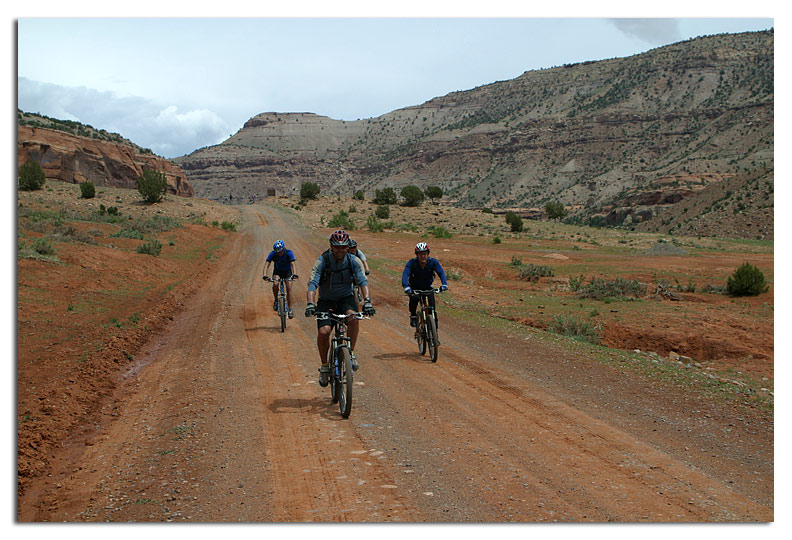 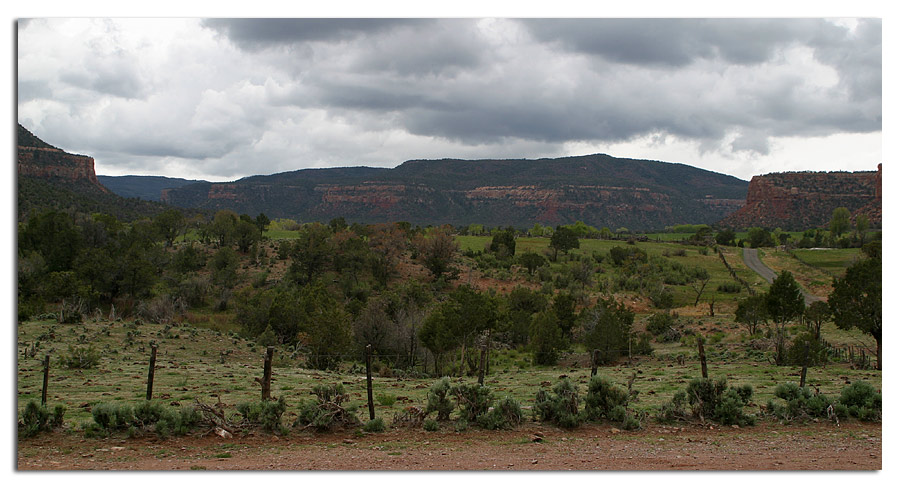 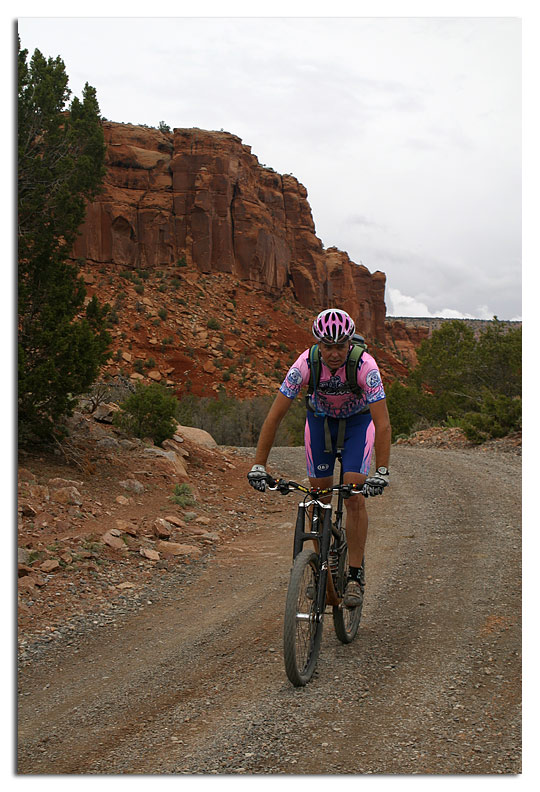 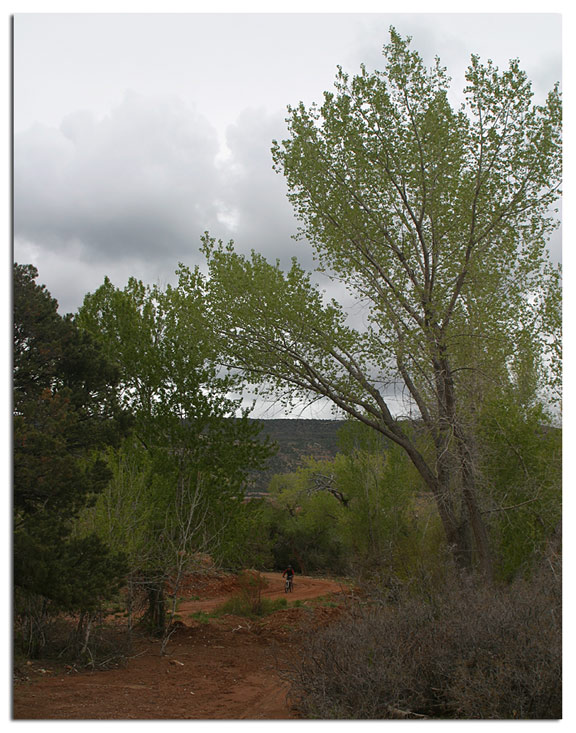 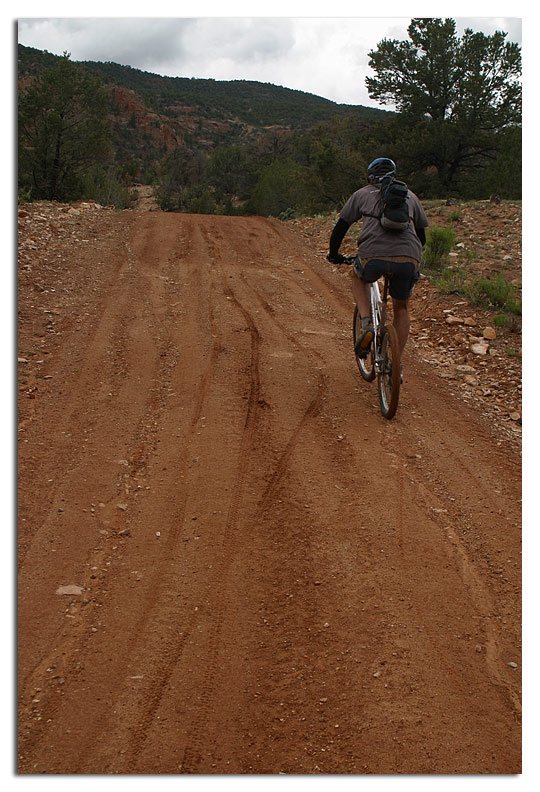 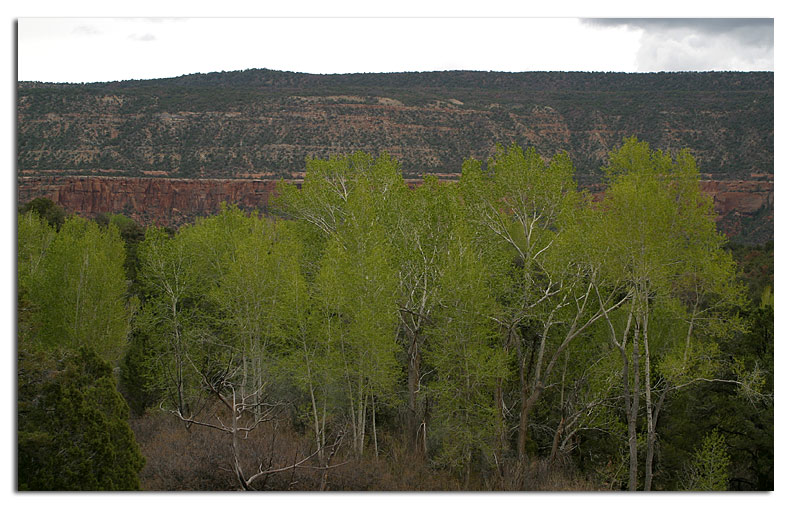 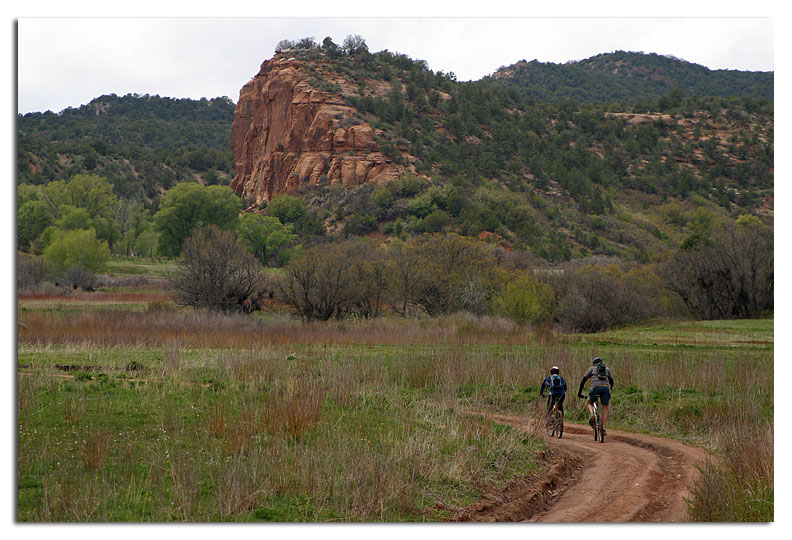 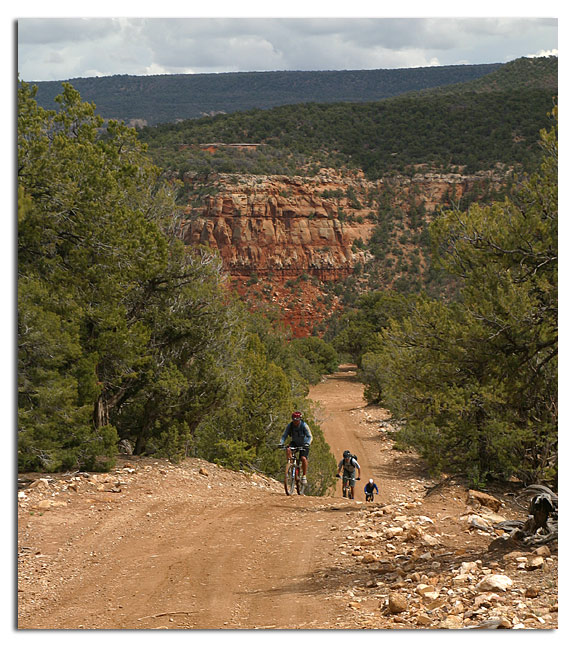 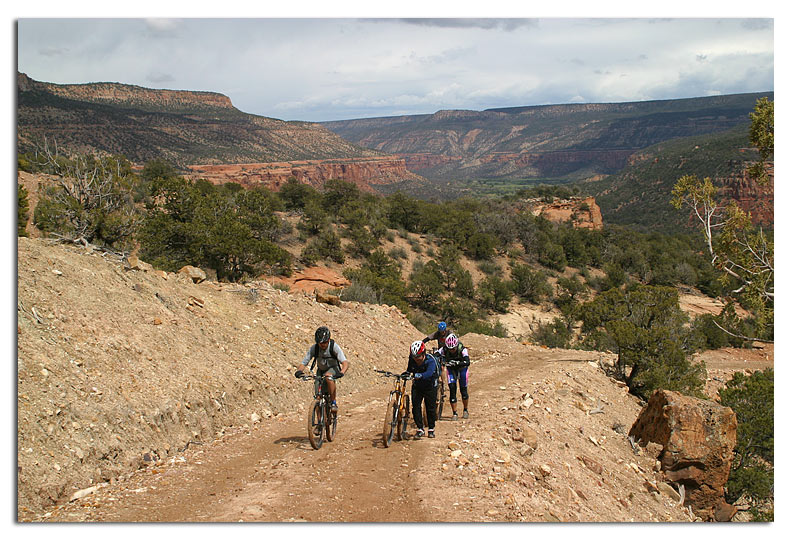 Along about mile 12 it started getting really steep. Really, really steep. And the soil was softening up a bit. Before we knew it we were in thick clayey mud. The worst, thickest mud I had ever seen. It caked up on the tires and completely stopped the wheels from spinning. And this was the steepest part of this jeep road. So we were carrying mud-laden bikes up a steep, muddy road. With every step we would slide backwards about half a step. It was torture. But we kept persisting. 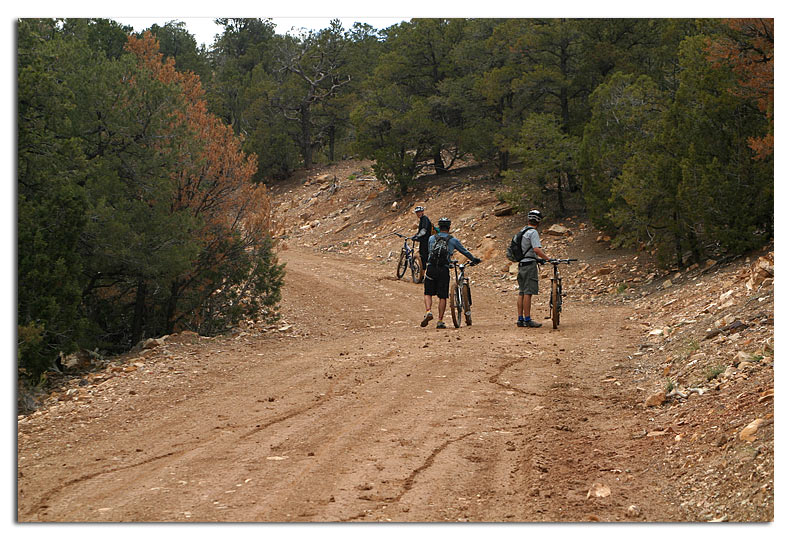 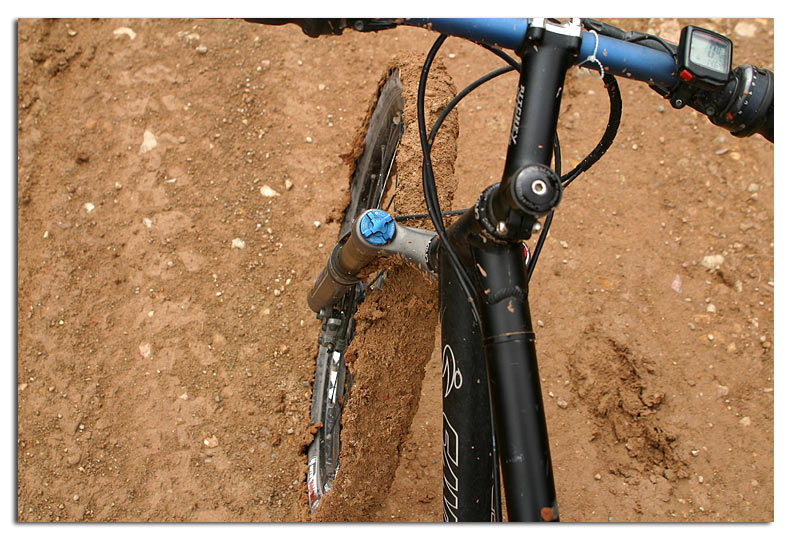 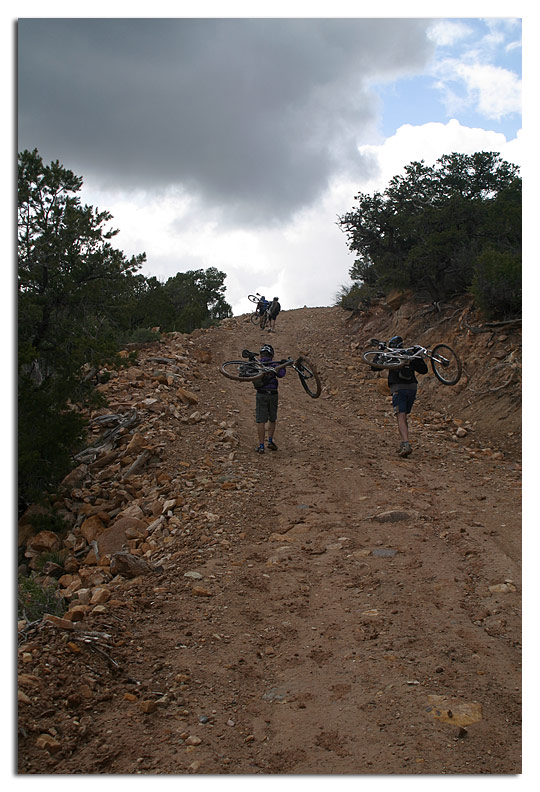 At one point during this I turned to Pete and said, “It’s hard work loving a sport this much isn’t it?”

Then it started to snow. We kept going.

A few yards later we saw a fresh bear track right on the edge of the road. Not a teddy bear this time. 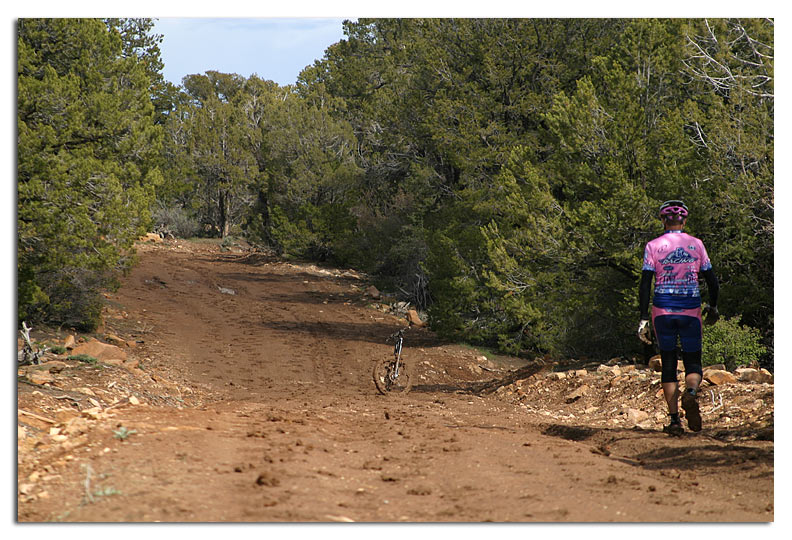 Pete had a pack with...well...a fair amount of really nice camera equipment in it. With that pack it was pretty difficult to carry the bike in any sort of comfortable manner. Finally he got close enough to the top that he figured he would leave the bike, walk up and drop off the pack, then return for the bike. He let go of the bike and it stayed upright. Basically glued in place by the mud. He dropped off the bag, walked back, hit the bars a few times and it still stayed upright. This mud had an attitude.

At the top, we regrouped, cleaned off the bikes, rested and generally commiserated in our misfortune. Despite the arduous trek up the mountain, this was not yet at fiasco stage. We were still gamely looking forward to the rest of the ride. After a session of actually beating on our bikes with sticks in order to clear off some of the mud from the tires, we pressed onwards. It was 4:30.

We headed across the top of the mesa on a road that was alternately rideable and mud clogged. We found what looked like the turn and began our descent, which was really muddy, but at least it pointed downhill. Still, it was bad enough at times that I was on my bike, pointed downhill, and it wouldn’t roll.

After about a mile or so of this I rounded a corner to find Pete walking back up the trail, arms waving.

“Dead End. Bentonite.” Bentonite is a clayey soil that puts all other clayey soils to shame. It is so retentive of water that it is used in drilling processes because of it's essentially muddy nature.  It was odd to think that people would come up here for the sole purpose of quarrying this mud. Relishing in their good fortune and undergoing some considerable effort to remove this mud from the mountain and take it elsewhere to be enjoyed at leisure. Out came the map…yep. We’d erred. Wrong turn. Back up the mountain we went. It was hell. Bikes don’t like to do much other than be ridden. They are awkward to carry, and they seem to get caught up in every branch. We were quieter now. There was less joking, a slightly more serious tone overcame the group. I think that at that moment that I saw Pete waving me to a stop in the trail that fiasco stage was achieved. Back up at the top, at the wrong turn we stopped and took stock of our food and water. Luckily I had several cliff bars in my pack, so those were doled out. Matt had some raisinets too. Brian had not yet re-joined the group. I took off the camera bag and pack and walked back down the path to meet him. Before I did so I said to J.D. “there’s no harm in turning back. We could backtrack from here and be back to the trucks in an hour or two.”

I headed down the trail and found a weary Brian resolutely carrying his bike up the trail. “Gimme the bike, it feels much better to just walk.” There was no argument. “have you been drinking water?” “yep” “Have you eaten lately?” “Nope, I had my last powerbar on the climb up.” Out came a clif bar, “eat half of this now” I said, “save the rest for later” We headed up to meet the group, and talked photography on the way. I determined to press my case for beating a retreat back down the road we ascended on.

Unfortunately for my resolve In our absence, the rest of the guys had found out location on the map and scouted out the correct turn, which was just a few hundred yards further down the muddy road. We pushed on. It was 6:30 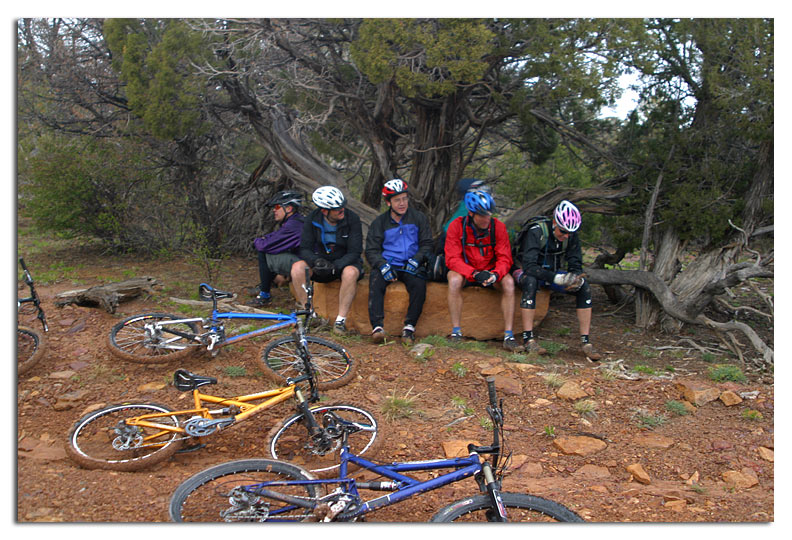 It started to rain, but the soil had turned into a much firmer sandy structure that was mercifully rideable. We descended into the gathering darkness. The descent consisted of about 8 miles of twisty doubletrack and three miles of very technical singletrack. From her eon out it was just a push. We were on the right track, but we didn’t know it, so our mental state was shaky at best. The weather was not at all accommodating for an unscheduled camping trip. The prospect of hypothermia was very much present in my mind. At about a half hour after dark we finally reached the singletrack, which for me was pretty much all walking. About a half hour earlier I had stuffed the front wheel into a little erosion gully and went over the bars. I wasn’t hurt, the camera wasn’t hurt, but it knocked the wind out of my sails. At that point I decided that this trail was no longer worth riding. I just wanted to get back to the truck without getting hurt or damaging anything. The amazing thing is that no one really did get hurt, and no one broke anything on their bikes. Instead we suffered small, mocking indignities. I tore off a chunk of skin from my knuckle while carrying my bike. Rich had a slow leak. Nothing major, just a steady hum of minor. At sunset we were descending through a beautiful sage filled headland. The sunset was gorgeous and laid out before us was a jaw dropping view, drenched in lovely evening light. I was too tired and worried to take a photo. I was still unconvinced that i would be seeing a warm bed that night, and I just didn't care. This is what irks me the most.

At about 9:30 we finally got back to the trucks. I had some snack food, and a cooler full of beer,and we stood around in the dark, eating, drinking, rehashing the whole thing and almost, but not quite convincing ourselves that we had fun. We had been on the trail for 9 hours and 3 minutes.

Postscript: No one can tell any of any mud stories ever. This trumps all. This was the worst mud ever. It’s what delayed us, exhausted us and benighted us. It was the Mud of the Niebelungen.