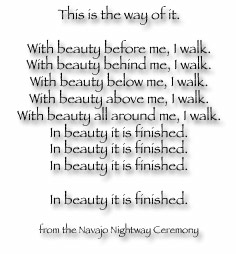 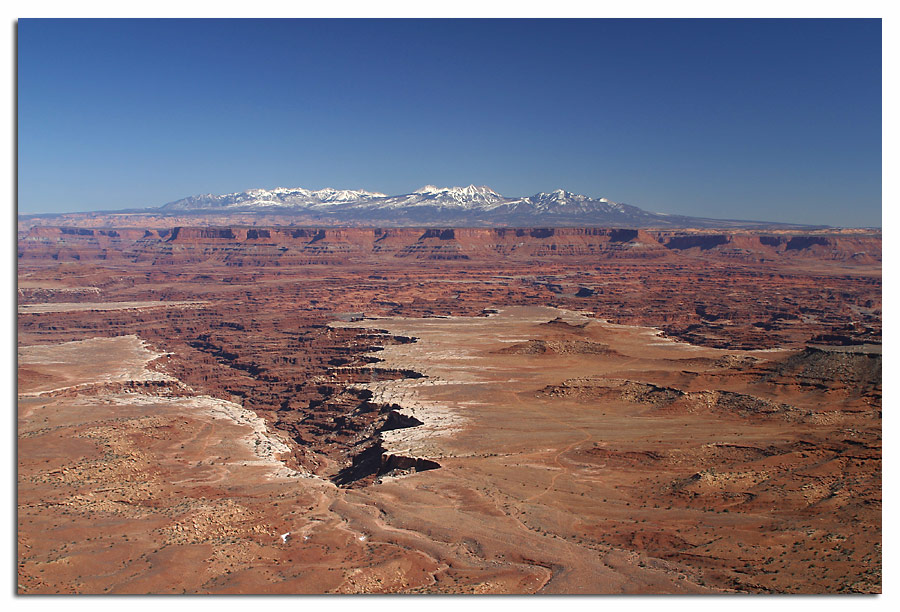 This desert is vast, and ancient. Both of these scales boggle the mind. The essential hugeness of this place plays tricks with your senses. If you stop and sit and gaze at this landscape, you soon realize that it is even more huge than you thought.  And it is old, so very old. This is not a landscape that can be glanced at and understood, which is why seeing it from a bicycle is so satisfying.

In early May I joined Mike and Maggie, proprietors of Magpie Adventures for a three-day tour of the White Rim Road in Canyonlands National Park, Utah. The White Rim road is an 84 mile long double track jeep road that skirts the southern edge of the Island in the Sky district of the park, following the incised meanders of the Colorado and Green rivers. The road stays, for the most part, on the White Rim sandstone, which is an erosionally resistant dune sandstone that was laid down on the underwater side of an ocean shore some 260 million years ago.

I feel compelled to start out with some statements of intent and attitude. It has become something of a badge of honor to crank this ride out in a day. “White Rim in a day” has become a battle cry for the goal-oriented cyclist. In fact I hear nasty rumors of “two White Rims in a day.”  Whatever.  I repeat, whatever.  After having done a White Rim in three days, I want my next trip to be five days. Or seven.  It is simply too amazing, too beautiful, and too mind boggling to rush through. You could do Cincinnati in a day. This area deserves to be lingered over. Savored. Processed.

Finally, this is not singletrack. There is a fetish in the mountain bike community for singletrack. With particularly choice bits of singletrack being bestowed with coveted laudatory terms such as “buff” “ripping” and “choice” I have been lucky enough to ride a lot of really great singletrack. This ride is different but by no means pedestrian. It is a jeep road. There are a few challenging sections, but this ride does not consist of the coveted singletrack. I have a friend who drives this route on occasion. He mocked me for replacing a derailleur cable prior to the trip. “You won’t be shifting much.” He told me. “You won’t be shifting much…”

Maggie put it all into perspective on the third day when we were tooling along an undulating section of doubletrack and she said “This is one of my favorite parts about this ride, rolling Ponch and Jon with a friend.” Yes. That’s it. Cruising, enjoying the sights. Being there.

So here I am, caught in the middle ground between the aggressive ambition of blazing through the White Rim in less than a day and driving through it in a truck.  Epic singletrack and “boring” jeep road.  Middle ground…unresolved territory. This seemed just about right.

One last observation. Harry, one of the folks on the trip, was making apologies for his aged mountain bike. “But you know what” I said, “It’s here.”

Mike and Maggie have been guiding for years. A couple of years back they started their own concern, Magpie Adventures. They have a national park concession, which is a fiendishly complicated set of permissions to obtain. Between them they have probably done 200 or so laps of the road, and their experience and knowledge of the area shines through.

We met up at Poison Spider Bicycles on a Monday evening for a pre-trip meeting. I had gone into work that morning and left Golden at about noon, which rolled me into the parking lot of Poison Spider in Moab at about 5:10. Not too bad. We had a brief meet and greet, went over the route, and discussed logistics. Then I headed up Sand Flats road to crank out a quick loop on the Slickrock Trail at sunset, and find a flat place to set up my cot for the night.

The next day, after a hearty breakfast at the Jailhouse Café, I met up with the group to shuttle out to the beginning of the trail.

I’m going to resist the urge to quantify and explain every moment of the trip. I took a lot of photos, so I’ll let those do the talking and interject when necessary. The route was clockwise through the park. 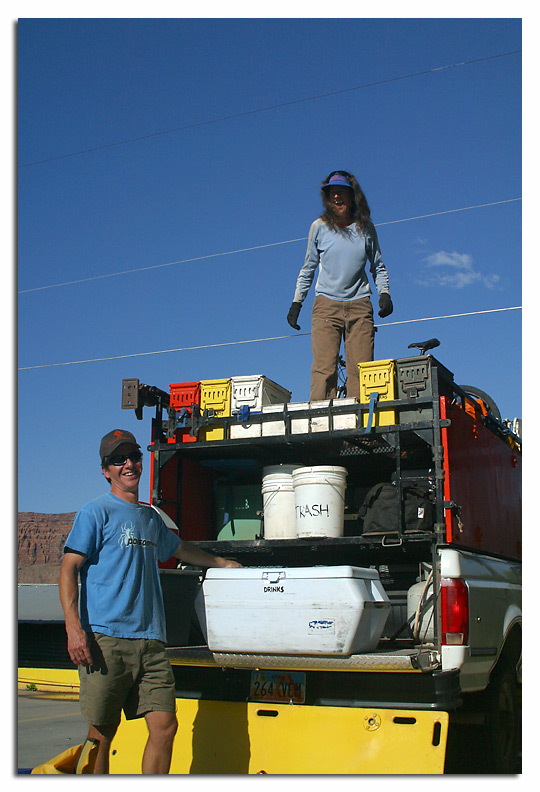 Mike and Maggie, our little group leaders. That's Patches the faithful truck there as well. 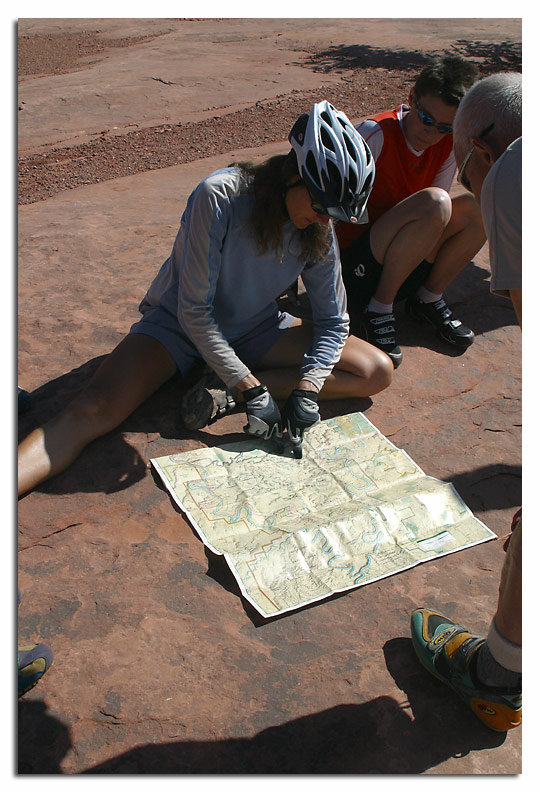 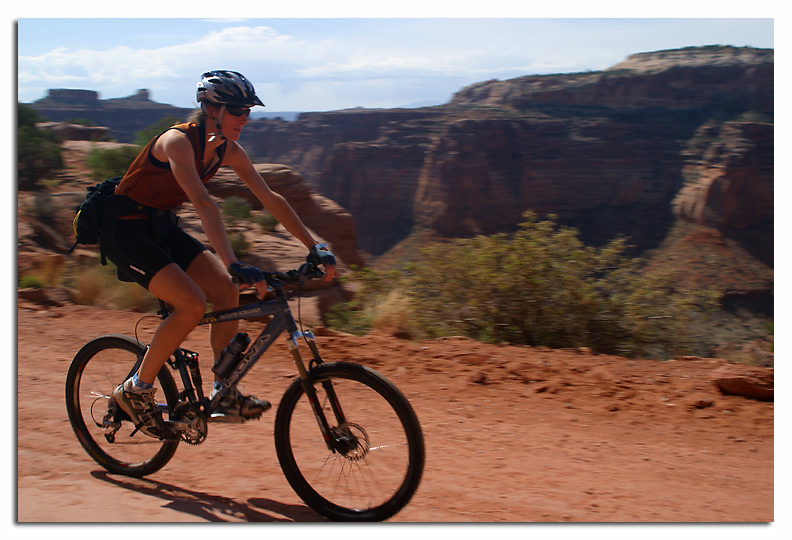 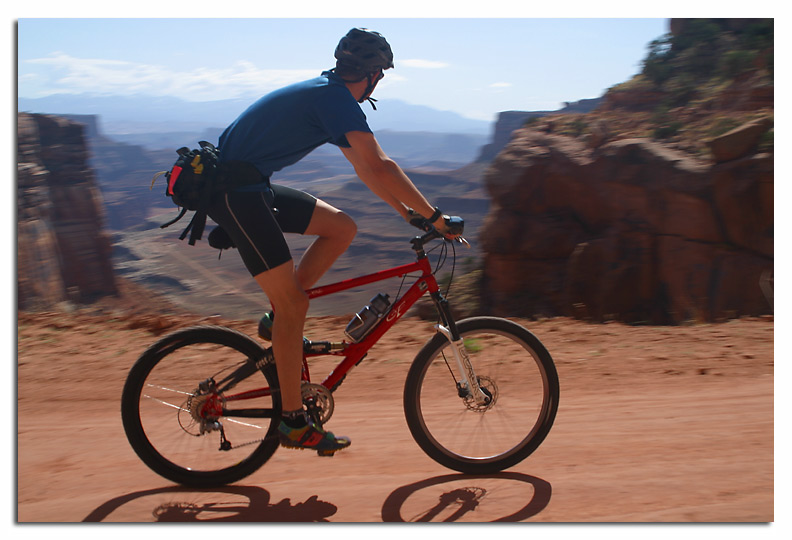 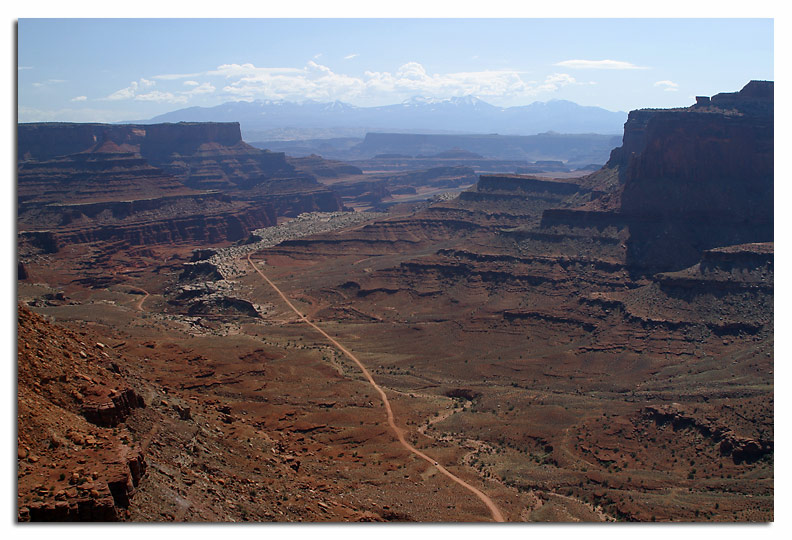 You can see a sliver of White Rim down there, just to the left of the road on the canyon's edge. 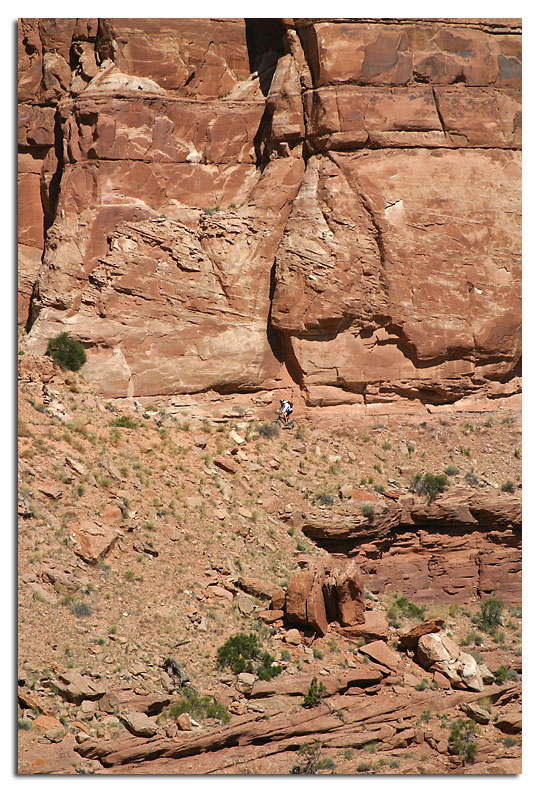 Rolling down the Shafer Trail.


This is the initial descent onto the White Rim from the Island in the Sky. This 1000 foot drop takes you off of the Wingate and Kayenta Sandstone formations and down 70 million years of geologic history to the Paleozoic Era and the White Rim Sandstone.  Thrilling stuff indeed. I guess that is part of the lure of this landscape, so many millions of years of our earth's history are laid bare by the forces of erosion and incision, upheaval and collapse.  In comparison, we are so temporary, so fleeting. And we blithely blunder through it, on bikes, in jeeps, or on foot.As Bruce Cockburn said,


"We're the insect life of paradise:
Crawl across leaf or among towering blades of grass
Glimpse only sometimes the amazing breadth of heaven." 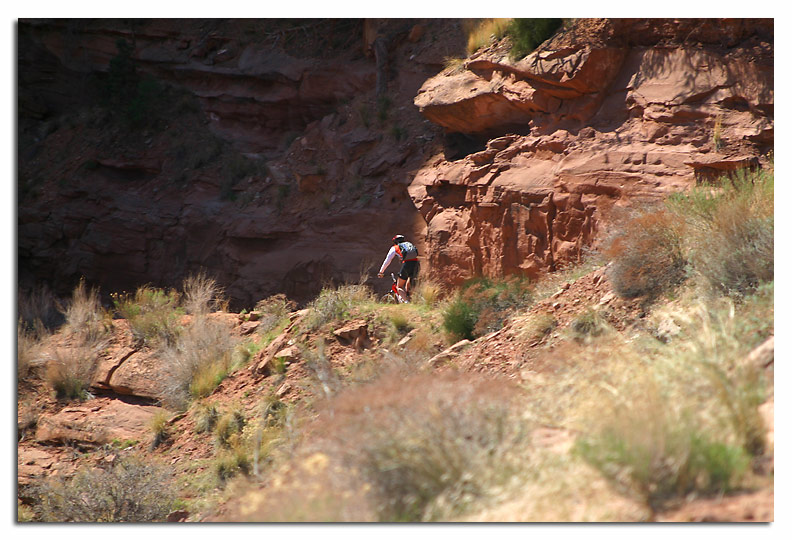 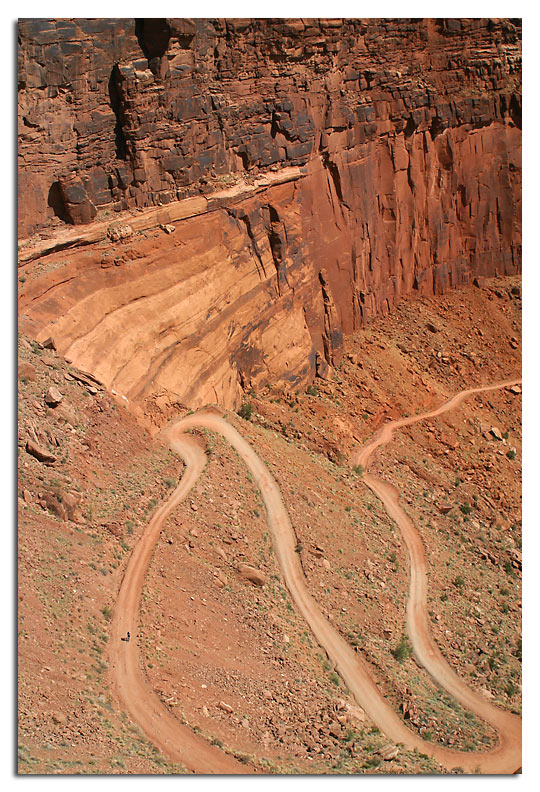